Construction is commencing on site with four of five schools under the EFA’s £47 million priority school building programme in Devon.

“We’ve worked very closely with the EFA, the schools and the wider stakeholders to design plans that suit each of these institutions, and deliver the right educational environment for their different needs. Some are still subject to planning approvals and final agreements.”

“We’ve got vast experience in the sector, and know the west country market well. It’s a great privilege for us to be the contractor on local schemes that will help young people to develop themselves and their life chances.”

At Ilfracombe Academy, demolition has commenced, and the new facilities will deliver a specialist arts school and sixth form. The project will see the academy’s existing building replaced with a state-of-the-art 1,250 capacity school. It will include brand new science and technology facilities, a new sports hall as well as a separate hall capable of sitting 800 pupils.

BAM worked with Devon County Council on the UK’s first passivhaus primary school in Exeter (Montgomery School) which is aimed at achieving carbon neutrality. It is behind other major schemes in the City such as the University’s Business School, and the Living Systems Institute, as well as a new University Technical College in Newton Abbot. It is behind many new buildings in Plymouth such as the new Theatre Royal. 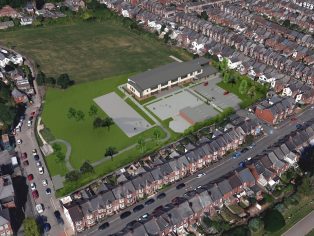 Ladysmith Junior School from above