In 2015 Serpentine Galleries celebrates the 15th anniversary of the world-renowned Pavilion commission. Over the past 15 years the Serpentine Pavilion has become an international site for architectural experimentation, presenting inspirational temporary structures by some of the world’s greatest architects. A much-anticipated landmark in London each summer, the Pavilion is one of the top-ten most visited architectural and design exhibitions in the world.

Serpentine Galleries announces that Spanish architects SelgasCano will design the 15th Serpentine Pavilion. The award-winning studio, headed by José Selgas and Lucía Cano, is the first Spanish architecture practice to be asked to design the temporary Pavilion on the Serpentine’s lawn in London’s Kensington Gardens. In keeping with the criteria of the scheme, this will be the studio’s first new structure in the UK, with plans set to be revealed in February 2015.

SelgasCano’s design follows Smiljan Radić’s Pavilion in 2014, which was likened by many to a spaceship resting on Neolithic stones. Previous architects include Sou Fujimoto, 2013; Herzog & de Meuron and Ai Weiwei, 2012; Frank Gehry, 2008; Rem Koolhaas and Cecil Balmond, with Arup, 2006; Oscar Niemeyer, 2003; Daniel Libeskind with Arup, 2001; and Zaha Hadid, who designed the inaugural Pavilion in 2000.

As with previous Pavilion commissions, the brief is to design a flexible, multi-purpose social space with a café that is open to all throughout the summer. While the architects have yet to submit plans, previous projects – such as the amorphous Plasencia Auditorium and Congress Centre, Cáceres; the light filled harbour-side structure of El ‘B’, Cartagena Auditorium and Congress Centre; the playful floating shapes ofMérida Factory Youth Movement; and the subterranean Office in the Woods – offer clues as to the direction they may take with this iconic commission. SelgasCano’s work is characterised by a use of synthetic materials and new technologies, often rarely applied to architecture. Taking inspiration from Luis Barragan and Richard Rogers, the architects use distinctive colours and references to nature throughout their designs. Their belief that architecture is secondary to nature also informs the design course on Nature and Climatology that they teach at the Massachusetts Institute of Technology and their work on the Educational and Medical Pavilion in Turkana, Kenya.

José Selgas and Lucía Cano, who formed the practice SelgasCano in 1998 in Madrid, have completed the majority of their buildings in Spain through a diverse range of commissions. The studio is currently working on a number of projects worldwide, including Pip House, Laurel Canyon, Los Angeles; the renovation of Texas Square in Oranjestad, Aruba, Lesser Antilles; and La Canaria House, Mount Washington, Los Angeles.

Exhibiting at the Guggenheim Museum and the Museum of Modern Art, New York, as well as MOT, Tokyo, and the Design Museum, London, SelgasCano was chosen for the Venice Architecture Biennale in 2010, curated by Japanese architect Kazuyo Sejima of SANAA, architects of the Serpentine’s 2009 Pavilion. SelgasCano has designed the interior of Second Home, a revolutionary new workspace for London’s creative industries in the heart of London’s technology quarter in Shoreditch.

The Serpentine is delighted that Goldman Sachs is the headline sponsor of this year’s Pavilion. AECOM, in collaboration with David Glover, will again provide engineering and technical design services. While this is the third Serpentine Pavilion for AECOM, David Glover has worked on the designs for the majority of the Pavilions to date.

“This is an amazing and unique opportunity to work in a Royal Garden in the centre of London. Both aspects, ‘Garden’ and ‘London’, are very important for us in the development of this project. We are in the middle of a garden, a ‘Royal’ garden indeed, once divided in two and separated by a Serpentine. That garden clings in the middle of London. Garden and London (which best defines London?) will be the elements to show and develop in the Pavilion. For that we are going to use only one material as a canvas for both: the Transparency. That ‘material’ has to be explored in all its structural possibilities, avoiding any other secondary material that supports it, and the most advanced technologies will be needed to be employed to accomplish that transparency. A good definition for the pavilion can be taken from J. M. Barrie: it aims to be as a ‘Betwixt-and-Between’.”

“SelgasCano are architects for our time who offer a tantalising vision of the future. Their innovative use of materials, bold application of colour, informed by playfulness and a passion for nature ensures that next summer’s Pavilion will be very exciting. They are the perfect choice to celebrate the Pavilion’s 15th anniversary.”

“London is one of the world’s leading financial and cultural centres and we believe that projects like the Pavilion encourage and inspire the exchange of ideas and perspectives across generations, reflecting the important role that businesses can play in supporting art and culture in the UK.” 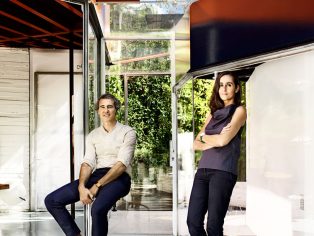