Fixed-fee estate agency eMoov.co.uk has calculated the cost of the average UK property in 2030.

The company applied an 84% increase to current prices – that’s the actual jump in property prices from 2000 to 2015 – to determine the values in 14 years’ time.

“Although this research is only a projection of what may happen by 2030, it is safe to assume that with prices continuing to spiral beyond affordability, history could well repeat itself.

“Rising prices are always good news for current homeowners, but it’s extremely worrying to look at the difficulty many have in getting on the ladder at the moment, let alone with a price jump of 84% by 2030.”

The capital took the top spot in terms of the highest value, with the average London house worth over £1 million in 2030.

A breakdown by borough revealed Barking and Dagenham as the “cheapest” borough with the lowest average of £450,000 – compared to £246,000 today.

Properties in Kensington and Chelsea, currently the most expensive borough with prices of about £1.9 million, are expected to jump nearly twice to £3.4m.

It’s a similar story to the north, as the projected average house price for Scotland in 2030 is the cheapest of the three at £297,222. Edinburgh is still the driving factor with the highest price of the lot at £432,468, joined by Aberdeenshire as the only other Scottish location to break the £400,000 mark.

Map: See the projected prices across the UK here 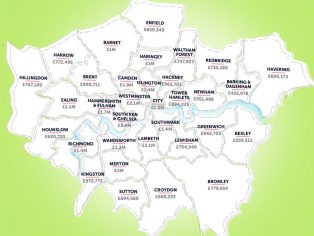