Vale Royal Athletics Club has overcome a funding hurdle thanks to help from housebuilder Redrow.

The club’s under 11s division received £500 for new equipment from the company after it was one of the first groups to apply for funding as part of Redrow’s Hartford Community Initiative.

Redrow launched three brand new developments in the village of Hartford, near Northwich, last year and pledged a pot of cash to help community groups like Vale Royal Athletics Club. It has so far given over £5,500 to various charitable and community causes in and around Hartford.

Run by volunteers, the athletics club, which trains its under 11s at the Mid Cheshire College campus in Hartford, is funded by a membership fee of just £50 per child per year, and has to rely on generous donations to make up the shortfall for equipment, competition fees, rent for training venues and transport.

“We’re very grateful for Redrow’s donation and it will go towards items like javelins, shot puts, discusses, hurdles and relay batons, which can be really expensive.

“The under 11s are doing really well. 29 of them recently competed at the Cheshire Cross Country Championships among around 150 club members. They also came second in the North Staffordshire Cross Country, which was a great experience for them.

“They’ll be using the new equipment to train for four Cheshire Track and Field League events in the summer.”

“The club does such great work encouraging youngsters in the area to enjoy athletics. It’s run by a team of brilliant volunteers who give up their time for free and it was our pleasure to help out with their fundraising efforts.”

Vale Royal Athletics Club has been operating since 1994 and has around 450 members. Athletes from the junior and senior sections of the club represent their county, the North of England, England and Great Britain at major athletics events. 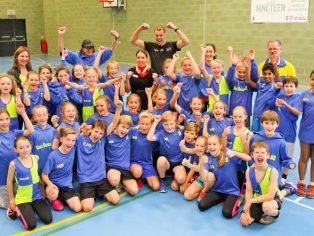