Ashford area is proving a prudent choice for Kent Buyers

With Ashford house prices rocketing 8 per cent in the last year and up 15 per cent on the previous market peak of 2007, plus economists predicting further increases, buying in the area could be a savvy move.

Ashford and the surrounding area is proving to be the ideal place to invest in a new home while still being one of the most affordable towns in which to buy in Kent. Redrow is one homebuilder that has recognised its potential and is offering a good selection of properties in the desirable village of Hamstreet.

Plus, with the CEBR predicting prices nationally will rise a further 3.5 per cent in 2016 and 4.2 per cent in 2017, buying now could be seen as a good investment.

With fewer than 10 properties available at Redrow’s popular Saxon Woods development in Hamstreet, purchasers will need to act fast.

Estate agent Ian Hatchard, from Connells, who are working with Redrow to market the final homes, said:

“People looking for a new home in Maidstone, Tonbridge, Sevenoaks and Tunbridge Wells are often attracted to move towards Ashford as prices are competitive in comparison to the surrounding areas and by extending their search they can get a lot more property for their money, plus the commuting time is no longer.

“The Redrow homes at Saxon Woods offer a higher specification than some of the other properties in the area. Everything is brand new and sparkling, including the kitchen, bathroom and boiler, so buyers can simply move in and enjoy living in their new home without having to budget for renovations or home improvements.”

Ian describes the properties at Saxon Woods as being well suited to commuters as the development is right next to Hamstreet Station, offering easy access to Ashford and putting London St Pancras within an hour’s journey.

“The larger properties also lend themselves well to occasionally working from home as designs such as the Blenheim include a dedicated study.”

The five-bedroom detached Blenheim will be ready to move into in spring, priced at £724,995.

Homeowners who use part exchange could wrap up a quick and simple move to Saxon Woods.

“Generally speaking, we’ll accept a customer’s property in part exchange if there home is worth around 35 per cent less than the Redrow home they want to buy. It saves both time and money, and offers the reassurance of having a guaranteed cash buyer, enabling people to move sooner rather than later.” 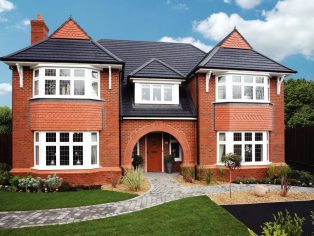 An example of the five-bedroom Blenheim from Redrow’s Heritage Collection.