A global engineering consultancy is urging the design and build sector to embrace green infrastructure in order to reduce air and noise pollution.

The consultancy used a computer software to recreate the flow of gasses and determine the effectiveness of green building envelopes in London, Los Angeles, Berlin, Melbourne and Hong Kong.

In the resulting report called Cities Alive: Green Building Envelope, Arup concluded that solutions such as moss and vegetated walls, vertical farming or roof gardens can cut localised air pollution by up to 20 per cent and reduce noise levels by up to 10 decibels, making it half as loud to the humans ear.

“Tackling rising air pollution is a priority to help improve people’s health. As our cities continue to become built up, ‘grey’ structures, such as walls and roofs, are a source of untapped potential for adapting into green spaces.”

Other findings highlight green facades can also reduce temperatures and peak energy consumption by up to 8 per cent. The researchers also said in the report that if Greater Manchester increased its green infrastructure by 10 per cent this would reduce average temperatures by up to two and a half degrees.

The firm identified pine and birch to be particularly effective in capturing large quantities of particulate matter, including during winter when pollution concentrations are highest.

When well-designed, green envelopes can have a positive impact on tackling air pollution, but can also deliver a wide range of social, economic and environmental benefits to make cities more attractive and healthier places to be.” 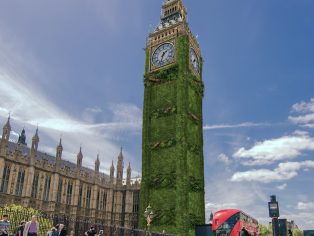