An art installation made from a 75 metre rotor blade has been successfully installed by Arup engineers in the centre of Hull as part of 2017 UK City of Culture celebrations.

One of the major challenges was manoeuvring the 75 metre long blade three miles along the trunk highway and through Hull’s narrow city centre streets. This involved the removal and reinstatement of over 50 street lights, traffic control signalling, pedestrian guard railings and other street furniture to facilitate the move.

The team worked closely with Highways England, the local Highways Authority and the police to ensure that transportation took place overnight to create the element of surprise for visitors and residents the following day.

The installation is exhibited partially rotated and at a tilt to show off the dramatic curvature of the turbine blade. The blade sits on two supporting tripods that have been engineered to fit with its complex three-dimensional geometry and allow some movement in the wind, whilst ensuring the structure is securely anchored.

“Blade is not only a dramatic artistic installation, but in terms of its transportation and exhibition, also a significant engineering feat. Over 50 items of street furniture, including traffic lights and lamp posts had to be temporarily removed to allow safe passage of this massive object. Part of the magic of the installation is people wondering how it got there – it’s a bit like a ship in a bottle.”

Blade is part of a programme of activities for Hull City of Culture 2017. As part of the preparations for the year-long festival, Arup led the £20 million transformation of the pedestrianised areas of the city centre including upgrading streets and squares within the historic centre. 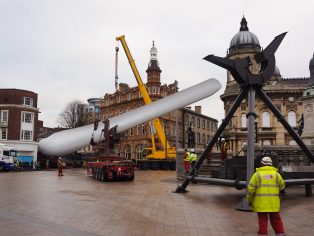