Arup celebrates the opening of Balls installation at its London office

A new installation called ‘Balls’ has opened in Arup’s London office which reflects how people interact with the building. The installation was created by Alma-nac and Ruairi Glynn as winners of a competition inviting talented, emerging London architects to use interactive architecture to demonstrate the “Future of the Built Environment in the 21st Century”.

The winning design – ‘Balls’ – is comprised of 42 light emitting spheres, with a range of 16,000,000 colour variants, that are suspended in a grid, each on an individually operable winch capable of moving the ball along a 10 metre vertical axis at a metre per second, whilst simultaneously changing the ball’s colour. A governing digital model and set of physical sensors allow data from any possible source to be translated to movement and colour within the atrium.

The entire installation is wirelessly controlled and responds to inputs such as the current energy consumption within the building, the number of people working in the office, internet traffic intensity, noise from meetings rooms or even how much coffee is being consumed.

“In times past, the system used to dominate over the individual. ‘Balls’ explores the opposite of that. The future of the built environment will be about user control, providing human beings with more autonomy and a greater sense of control over their environment. In many buildings the atrium is only occupied by light and air and we were inspired to fill this space with something engaging, interactive and responsive to the people within a building.”

“This installation hints at much bigger changes that face industry and the increasing interaction of open internet controls connected to physical devices, to interact with our built environment. We are currently working with the construction and design industry and designing user centred applications that are simple to understand and wide open to internet innovation. Our engagement is limited only by our imagination.”

‘Balls’ will feature in the atrium space of Arup’s London office at No. 8 Fitzroy Street, before forming part of the London Festival of Architecture and RIBA Open Studio. The exhibition is open to the public between the 4th and 27th June. 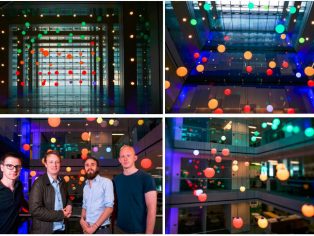