When global architects 3DReid were looking for a UK ceiling tile manufacturer, which was “critical” for the costing and timescale of their project, there was really only one option – Armstrong Ceilings.

But specifying Armstrong Ceilings, which has production facilities in Tyne n Wear, Stafford and Sittingbourne also came with a bonus, it being part of the global Armstrong World Industries group based in the US where 3DReid’s client, United Airlines, is also based.

This enabled Armstrong’s global Architectural Specialties team to deliver samples to the airline and advise them directly when it came to the complex ceiling design for the 2,000m2 United Global First Lounge the new Queen’s Terminal (Terminal 2) at Heathrow airport.

This is one of two new United Airlines facilities at Heathrow’s new Star Alliance terminal and gives testament to the airline’s commitment to Heathrow as its hub for Europe. It reinforces their new design concept recently launched at Chicago O’Hare airport which aims to signpost passengers with distinct design elements which reflect the lounge’s location.

The first carrier to operate out of the new terminal when it opened in June, United Airlines’ brand is key to future lounges and 3DReid worked closely with Chicago-based practice Solomon Cordwell Buenz on designs for the interiors of the United Global First Lounge aimed at first and business class passengers.

Features include a long, sweeping bar, floor-to-ceiling windows with views of the airfield, and high-quality finishes throughout including a large Big Ben replica clock in the tea lounge section. The United Global First section had a bronze colour theme and the United Club section had a silver/chrome theme, both reflected in the ceiling choices.

Some 800 sq m of Armstrong’s Axiom Knife Edge 9290mm x 1200mm canopies with a mixture of perforated metal MicroLook 8 tiles in a pearl beige finish with fleece, the bespoke RH-225 hook-on ceiling system, also in pearl beige as well as brushed aluminium satin and signal white, and the Microperforated 600mm x 600mm S-Clip F swing-down tiles with fleece installed on the System 3000 concealed grid in signal white – were specified to complement this design.

3DReid’s Felicity Hurling said there were a number of metallic finishes within the project and it had been critical that the ceiling tiles complemented the skirting, flooring, trims and sockets but Armstrong provided a number of iterations through design development and worked hard to achieve a finish that matched the client’s design aspirations.

“The ceiling layout is particularly complex, utilizing a number of ceiling finish levels and interfacing with joinery products. Additionally there are a number of access requirements from the ceiling due to the quantity of services and the final outcome achieved full void access without reducing the integrity of the aesthetic.”

3DReid originally approached Armstrong due to their previous work with the practice. It was critical that they worked with a UK supplier to achieve the cost and programme requirements of the project as the construction programme was particularly tight, from July 2013 to May 2014, with the terminal opening in June 2014.

The added benefit of Armstrong being able to deliver samples and advise their clients directly had provided reassurance and a cohesive working environment.

The Armstrong systems were installed by HLS Installations for main contractor ISG Group. 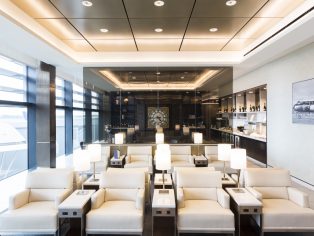