The manufacturer recycled a total of 142,000m2 last year during which time nine members of Armstrong’s 136-strong Omega network of approved installers proved their recycling expertise to such an extent that they qualified as Green Omegas.

All of the returned material has been or will be used in the manufacture of new mineral ceiling tiles, saving the company (which does not charge for the service) more than £28,000 in virgin materials.

And not only is the scheme saving contractors money, the Green Omega accreditation is also making them more money.

“The benefits of becoming an Omega installer were the closer working relationship with Armstrong, PFP being recommended to clients by Armstrong for projects, and receipt of project leads from Armstrong.”

“We can project ourselves better as a reputable installer of Armstrong products which is of particular benefit when we are competing against labour only sub-contractors as we do come across a number of main contractors trying to weigh up the choice between buying materials direct and using labour-only sub-contractors (self-employed operatives) versus ourselves to procure and install the materials.”

“Most labour-only sub-contractors would not be Armstrong Omega certified and so if we can demonstrate to the main contractor that we are a certified installer and a Green one at that this makes a difference. It makes a difference too against those of our competitors who are non-Omegas. It just gives us a bit of an edge against the competition (albeit some main contractors are only looking for the cheapest price).”

The £12 million turnover company became a Green Omega last year on completion of their biggest Armstrong project to date – the  Queen Elizabeth University Hospital in Glasgow – where 10,000m2 or 35 tonnes of mineral ceiling tile off-cuts were recycled over the two years for main contractor Brookfield Multiplex.

“The sheer size and complexity of this project could have made it an extremely challenging one but the recycling element, particularly with Skipeez on board, went very smoothly. We had never used such a variety of Armstrong systems before on one project but thanks to the level of support we received from Armstrong’s local sales and technical teams and the distributor, we managed to deliver a project we are all very proud of.”

CAP, who had recycled plasterboard walls before, also became a Green Omega last year after recycling 7,000m2 of old tiles and new tile off-cuts from an office block in Bristol for main contractor Midas.

Director Gary Rice said of that:

“It was a very tight, congested site so the logistics were challenging.”

“It is definitely worthwhile getting involved. It provides us as a sub-contractor with a very easy route to recycling our off-cuts. It also allows us to add another element to our recycling strategy as we also currently recycle our plasterboard waste on a number of projects.”

“Armstrong are streaks ahead of the competition when it comes to their commitment to recycling mineral ceilings within the industry.  They have ensured that their distribution partners (our suppliers) are fully on board with the scheme and this allows us to work as a team to ensure waste is diverted from landfill.”

“As more and more main contractors are becoming increasingly environmentally conscious working with Armstrong allows us to present this as a selling point to the client which places Armstrong’s products ahead of the competition and gives us an edge over the competition. At this stage it isn’t easy to quantify the benefits, especially not in terms of turnover, but it is definitely a strong advantage and selling point for everyone involved in the scheme.”

“The benefits of being an Omega member are the recognition, being a recommended installer of the market leader. The support from Armstrong has certainly helped us to grow the business from ground zero to £8 million.”

And of being a Green Omega, he said:

“We are very conscious of our environmental impact so it helps us with that and it helps that we can demonstrate that to our clients. We are looked upon more favorably by clients because we have the recycling system in place.”

“It’s a no brainer as there are no cost implications but it helps us with cost reduction to a certain point in that we can monitor our waste more and also know that hopefully when the tiles go back in it helps to bring down the cost of new tiles.”

Of the future for ceiling recycling, PFP’s Boyd Sinclair said:

“The momentum needs to be kept up although with the size of Armstrong as a global player and their commitment to drive this through as a USP for their business this should not be a problem.”

“The challenge, which is also an opportunity, is to get more sites taking advantage of the scheme as some main contractors are more conscientious than others.  It really comes down to Armstrong and the Green Omegas spreading the word.  Commonly when it works on one site that site team/company take the system/process forward to the next one and before long it is the norm or is incorporated into the way they run their sites. So with time it should become common practice.”

“It is making main contractors aware that this is available to them and that we are able to help with that. I think Armstrong have done a good job of covering it off – they are even taking other manufacturer’s ceiling tiles back now. As for the future, perhaps recycling of the grid systems should be next on the agenda and more ways of using off-cuts actually on site, perhaps for additional acoustic flanking.” 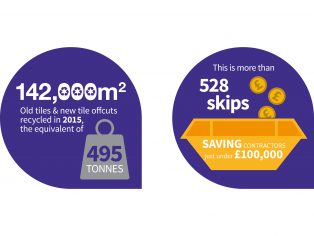