Armstrong Ceilings ring the changes at a new church

Ceiling canopies from Armstrong were specified for a new community church for their aesthetics, acoustics and green credentials.

Some 52 of Armstrong’s Axiom Classic square canopies (1.8m x 1.8m) and 14 triangular ones at half that size, each comprising white mineral Dune Supreme tiles within a 24mm Prelude exposed grid, feature over 1,500m2 of the stunning auditorium of King’s Church, Amersham.

Built over a year at a cost of £2.8million by main contractor Jarvis Construction, the new church is located on the 2.69-hectare site of a disused school playing field. Its leaders had been searching for a larger site for their church for some years and submitted a joint planning application with CALA Homes.

Architects Byrom Clark Roberts were briefed with designing a landmark building that had a civic presence but did not look like a church, even incorporating a paved café forecourt as public space. It is also future-proof, capable of accommodating a balcony if required in future.

As well as traditional worship, the 375-seat auditorium had to be able to cater for activities including concerts, conferences and banqueting. And it was used as the latter at the celebration service in November 2013.

Byrom Clark Roberts had used Armstrong Ceilings on a church before – the LifeChurch in Sale, Manchester, but the one for King’s Church was developed to incorporate LED lighting into some of the square canopies.

“I came up with the ceiling cloud idea when designing a church in Leeds in 2007. We had used Armstrong Ceilings on a previous scheme but for this one, sustainability was a key issue, so the Axiom canopy was a given.”

King’s Church is served by ground source heat pumps for low-temperature hot water heating throughout, underfloor heating and heat recovery ventilation that allows more than 70% of the heat to be recovered.

“The auditorium is mechanically ventilated and acoustically attenuated to reduce the noise impact on the surrounding housing. Noise break out from the auditorium was a key design constraint which required careful design consideration, particularly to the roof, windows and mechanical services. There was also a budget for the ceiling which could not be exceeded, with value-engineering workshops done at key stages through the design process.”

The Axiom Classic canopies are an easily relocatable modular system comprising an aluminium grid with a choice of highly light-reflective mineral, metal or soft fibre tiles manufactured from up to 82% recycled content.

Specified either at initial design stage, as at King’s Church, or as a quick-fix refurbishment solution, they help to reduce reverberation time and noise levels and increase speech intelligibility. They also allow specifiers to play with different planes and levels to conceal

and co-ordinate with services such as the LED lighting.

They were supplied by distributor CCF Manchester and installed at graduated heights at the steel-framed King’s Church by Conron Ceilings who had a team of between two and five working on site for two months. 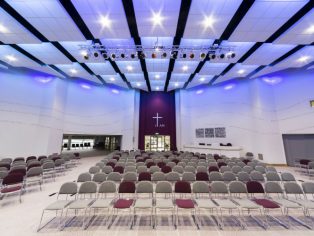