The use of its new Dune eVo tile on a recent, volunteer-run project has prompted Armstrong Ceiling Solutions to launch a competition via social media which gives a community organisation the chance to win a new ceiling.

The next-generation, ultra-green Dune eVo tile was specified by Maber architects for a new bunkhouse for the Drum Hill Scout Campsite in Derbyshire. The tile, which is 100 per cent recyclable, provides class-leading visuals and improved acoustic performance through a new surface which is both brighter and smoother.

As the new bunkhouse signifies a new beginning for the delighted Derbyshire scouts now Armstrong wants to offer the same opportunity to other community groups through its #eVoNewBeginnings campaign.

“I think it’s a really nice place. It looks a lot better than the old one and it’s a lot more friendly and inviting. It will make a big difference because there is now a lot more opportunity to do stuff than there used to be.”

The competition prize is up to 250m² of Dune eVo tiles and grid plus up to three days of free installation by a member of Armstrong’s national network of approved Omega installers.* The competition is open to any non-commercial project in the UK and Ireland that serves the community

The #eVoNewBeginnings campaign will run on the manufacturer’s social media sites (Twitter, LinkedIn and Pinterest) throughout May (when the Drum Hill bunkhouse is officially opened) as well as June (Dune eVo’s first-year anniversary), with competition entries judged by two internal and one external judge from Armstrong’s charity of choice Rays of Sunshine. The winner will be the one that most captured their imagination.

“I think it’s another advancement for the ceiling tile in terms of the specification and the acoustic delivery.”

“As a long-time specifier over the past 12 years working in architecture I trust and know the Armstrong product range will deliver what we want, giving us quality and robustness within our budget range.”

On volunteering his time and expertise, he said:

“The project is difficult to value due to the generosity of numerous local companies and volunteers giving their free time. If we had approached a main contractor to deliver it would probably be in the region of £600,000 to £700,000 to deliver the scheme.”

“It has been a rewarding project for us. The Scouts association is giving young people from all backgrounds shared experiences that will really equip them with skills that will last a lifetime. To play a small part in that feels pretty good.

“I think it’s amazing what can be done by volunteers giving their time and companies supporting us to provide an outstanding building.”

“We need to stop using new resources all the time and use the stuff that we have got on this planet.”

To be in with a chance of winning a #eVoNewBeginnings for your community space, complete a short entry form about the project, detailing why it should win and uploading a photo of the existing building, at www.new-beginnings.com. 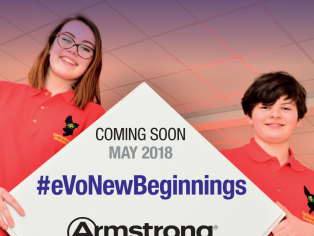