The total amount of tiles recycled by Armstrong Ceilings at the airshow has risen again.

Armstrong Ceilings continues to break the mould for recycling building materials at the Farnborough International Airshow.

The UK manufacturer has again exceeded the amount of ceiling tiles it recycles at the bi-annual show it has supplied for the past four events, this year some 14,769m2 compared to the 13,400m2 it recycled in 2014 – the first time the company employed its Off-Cut scheme as well as its End-Of-Life scheme.

Not only that, the amount of mineral ceilings recycled from the potential from more than 200 temporary corporate hospitality and business chalets and exhibition halls on site rose from 61 per cent in 2014 to 79.8 per cent this year, winning praise from the show’s head of operational development and Health and Safety.

“I am extremely pleased with the outcomes this year working with Armstrong. There has been a significant year-on-year improvement over the last few shows since we began working together.”

Some 1,885m2 (or 12.7 per cent) of this year’s recycling total was from 70 bags of ceiling tile off-cuts recycled prior to the show between July 11 and 17 while 12,884m2 (87.3 per cent) was from tiles dismantled after the show, all in all saving contractors (whom Armstrong does not charge for the service) more than £10,000 in landfill and skip hire tax.

In terms of environmental impact, as well as the 14,769m2 diverted from landfill, this year’s scheme saved more than 73 tonnes of virgin raw material, more than 20,000 kWh energy, more than 36,000 CO2 equivalent greenhouse gasses, and more than 251,000 litres of potable water.

The tiles for recycling (Dune Supreme and Fine Fissured) were collected in bags and stored in the exhibition hall then returned on nine trucks to Armstrong’s production facility in Gateshead for recycling back into the mix with the help of logistics company and fork lift operators Ceva Showfreight, specialist waste management and cleaning contractors Sagum Events and the Southampton branch of specialist distributor SIG Interiors.

The corporate hospitality and business chalets, which are used by such prestigious exhibitors as Lockheed Martin, Boeing and Rolls Royce, typically take five weeks to build and fit out and one week to dismantle.

Oliver Newin, who oversaw the recycling and environmental element of the show, which prides itself on its green philosophy, said:

“We encourage people to use Armstrong because of their recycling capabilities and this year it went very well.”

“Our recycling scheme was very well received by the contractors on site. I feel from them it is now an expected part of the show.”

Armstrong was first brought in to recycle its suspended ceilings at the 2008 airshow by the event’s largest independent chalet fitting contractor SDD I GES and back then saved 2,600m2 (or 10 tonnes) from landfill.

The ceiling tiles recycled from this year’s Farnborough airshow help to bring the total amount of recycling by Armstrong since 2009 to more than 500,000m2.

Armstrong pioneered ceiling recycling in the UK in 2003 and since then the programme has evolved to include all mineral tiles, no minimum quantities, a growing network of “Green Omega” installers and partnerships with national distributors to further support customers’ local recycling requirements. 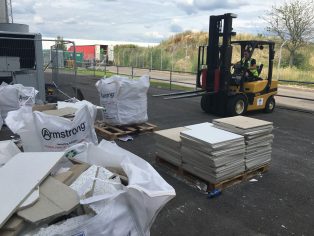