The refurbishment of a ward at Bristol children’s hospital includes printed ceilings.

Hospital stays for children striving against cancer in the Bristol area are now more positive and stimulating, thanks to Armstrong Ceiling Solutions and its chosen charity Rays of Sunshine, a charity that brightens the lives of recovering children by granting their wishes and providing support in hospitals.

A refurbishment of the oncology day beds unit at Bristol Royal Hospital for Children, part of the University Hospitals Bristol NHS Foundation Trust, includes acoustic ceilings featuring sky scenes and shoals of fish to reflect its new name as the Ocean Unit.

The ceiling systems donated by Armstrong, totalling almost 300m², were installed for free as a part of a ward wish by specialist sub-contractor H + L ceilings – a member of Armstrong’s approved national network of Omega contractors.

The BioGuard ceiling tiles that feature anti-bacterial benefits for healthcare environments were finished with a coating of sky scenes in the recovery bay for older children, a school of fish swimming down a river in the reception/waiting area corridor, and a shoal of fish in a small treatment room.

They were installed by a team of three from H + L over two weekends, with the old tiles from the 10-bed ward being sent to Armstrong’s factory in Gateshead for recycling and the company’s streamlined TLS grid, which is up to 20 per cent faster to install, replacing the existing suspension system.

Around 35 per cent of the total tiles were white and screen-printed which Armstrong supplied with a number on the back so H+L could follow appropriate layout guidelines.

Armstrong became involved in the project after its chosen charity Rays of Sunshine identified the refurbishment of the ward, which had not been updated for 15 years, under its Hospital Ward Wish programme.

This works to, among other elements, decorate treatment rooms to transform sterile spaces into stimulating environments which provide a distraction and enable children to respond better to treatment.

The refurbishment of the Ocean Unit, which has two six-bed bays and four single rooms as well as four consulting rooms, and looks after all oncology, haematology and bone marrow transplant children up to 19 years, also included new wall art and furniture.

“When Armstrong asked us to install the project we were more than happy to get involved. It was treated like any other job but the installation team volunteered themselves for the weekend work.”

And of the tile numbering system he added:

“We have never had to work that way before but it was pretty easy to install by following the instructions Armstrong gave us.”

“A very big thank you to everyone involved in making this happen. The ceiling makeover will make such a massive difference to the children visiting the ward for treatment. It will make their time there so much more bearable and will put lots of smiles on lots of faces.”

Jane Thomas, donations co-ordinator for the children’s services division of University Hospitals Bristol, thanked Armstrong for their support in ‘transforming’ the ceilings for the patients and their families.

“The work completed by Armstrong Ceilings has made the area a brighter but still calm place for the children to be in, with the fish gently swimming through. Especially popular is the large bay under the tropical picture where the children can recover following treatment.”

“Our latest exercise for Rays of Sunshine was particularly rewarding as it was easy to see the difference the bright, fun ceilings made to the children.”

BioGuard tiles are cleanable and perform to Sound Absorption Class C and Clean Room Classification ISO 5. They are also 85 per cent light reflecting and 95 per cent humidity resistant and manufactured from 42 per cent recycled content.

More information is accessible via the Armstrong Ceilings website https://www.armstrongceilings.com/commercial/en-gb/. 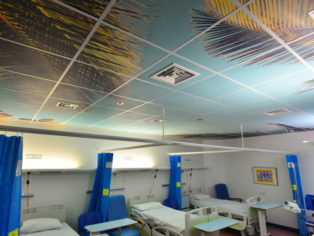