Are students being bullied out of the rental market?

Buying a property in the UK is becoming increasingly unaffordable, driving-up demand and prices for those wanting to rent. Research suggests that by 2025 over 50 percent of 20-39 years olds will be privately renting. This is a major issue for the future generation, especially students: they will not only face unlikely odds of becoming home owners but also increased competition within the rental market from high earning professionals and retirees with bigger budgets.

Research from EasyRoommate suggests that the average cost of rent for a double bedroom in London is £692 pcm. Professionals and retirees are on average willing to pay £636 pcm and £616 pcm respectively, whereas students are on average only willing to pay £580 pcm, more than £100 below that of the national monthly average. This research has also highlighted that around 40 percent of students choose their flatshare according to its proximity to the university campus. There lies an additional problem; there is a stark reality between how close to the campus students would like to live and what they can actually afford.

Property prices rise and fall based on location. As the majority of universities are located within popular cities, students could end up having to exceed their budget by up to 50 percent to live close to a university campus in London. For example, students studying at Kingston University, at the Roehampton campus would spend between £500 and £600 pcm on rent for a double bedroom. For students studying at Queen Mary University, a similar room would cost between £700 and £800 pcm. As you move further into Central London the prices continue to rise. For students studying at the London School of Economics, a budget exceeding £800 pcm would be required to find a double bedroom to rent.

To make matters worst, students face some negativity from Landlords.

The research uncovered 30 percent of Landlords wouldn’t want to rent their bedroom to a student with more than a half of the negative responses stating that the reason is that students are messy.

Unfortunately, students will face many hurdles in their hunt to secure good accommodation. There are two hurdles that are becoming increasingly concerning and are rarely taken into consideration.

In contrast to the UK, we see that in France and Spain there is far less competition from professionals : they account for around 46 percent while students account for 53 percent.

But it’s not all doom and gloom, there is light at the end of the tunnel for smart students. Here are some simple but effective tips for students to find great accomodation this summer. 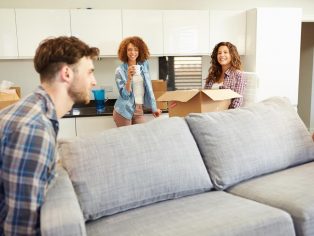