Matthew Gilchrist, of Peace Recruitment, was recently named the best recruitment consultant in Scotland at the s1 Jobs Recruitment Awards – quite an achievement considering he has only been working in recruitment for a little over two years.

Matthew’s award win comes on the back of 89% of his placements still being in the job he placed them in over a year later. This fantastic track record was the reason why so many of his clients took the time to vote for him to win.

“To say I was shocked is an understatement, I was delighted just to be nominated. The fact it was voted for by the candidates and clients I help on a daily basis made it even sweeter, it shows I must be doing something right. The night had already been a huge success after Peace won small recruitment firm of the year, it never really crossed my mind that I would win as well. I was up against consultants from much bigger agencies, some with between 15 and 20 years’ experience, so to win ahead of them is an amazing feeling.”

Matthew, 26, previously worked in the banking sector where he worked his way up enjoying success in various sales-led roles, and had never really considered recruitment as an option. But after finding more about the bespoke options Peace offered, and the ambitious growth plans for the future, he was convinced and took up his role as Peace’s first-ever architecture consultant in January 2014.

“I was enjoying my time at Lloyds bank and was working my way up, and had never thought about recruitment as an option. I suppose from what I had read, and heard from other people, I had quite a negative perception of the recruitment industry. However, after a chance meeting with a Peace consultant my opinions began to change. Then after meeting with Peace’s managing director, Chris Peace, I was convinced this was something I wanted to do and could make a success out of. Peace’s model of excellent commission, great progression opportunities, combined with a more- relaxed working atmosphere focused on team work really appealed to me.”

“I am a very career driven person, so working for a bespoke company which has been built from scratch into a multi-million-pound organisation in little over five years was an exciting opportunity I couldn’t turn down. I also liked the idea of being in charge of my own sector, where targets have to be met but also where a lot of trust is placed in you, this was a huge difference from being micro-managed at the bank.”

“I was starting the architecture department from scratch, as this was something Peace had not offered before. So to coin a phrase, this was going to be my baby, it was up to me to make a success out of it. I guess I was lucky that it was a good time to start, as the architecture market was just starting to pick up after the recession. I would say it took about 6-12 months to build the desk, and after that we really started to see some positive results. I put in a lot of hard work, really pushing to build up excellent lasting relationships with clients, which meant working longer hours and working some weekends. But it has really paid off.”

“I came in with the mind-set, which Peace demands from all its consultants, that we are in the recruitment business, so this means finding high-quality candidates and matching them to the right job that they will be happy in, and just as importantly, remain in. I think the main reason I was nominated for the award in the first place was that 89% of my placements are still in the job I placed them in over a year later, this is a great return for the money spent by my clients.”

“It’s my aim to build on this success and use it to really dominate the architecture recruitment market in Scotland. We already have a strong foothold in the central belt, so the next step is to move further north and also down into the borders. To enable this to happen I plan to take on a new consultant, someone who may not have recruitment experience but who is highly driven with sales experience, possibly with an architectural background.”

“We are obviously delighted with the recognition that Matthew has now received. He is one of our top performers and has shown others what can be achieved through commitment and hard work. It’s my vision that Peace will be the recruitment company of choice in Scotland for the construction industry in the next five years, and I see Matthew playing a big part in making this happen.” 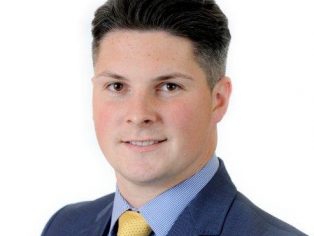