The 4.5-year facility includes a 12-month extension option. Goldman Sachs is a significant global investor in the US and European rented residential markets and the transaction marks its’ first UK multifamily development loan.

The announcement will be seen as a further boost to the emerging sector as confidence in build-to-rent among investors and funders grows.

In October 2018, Apache Capital created the UK’s biggest privately-funded multifamily investment platform when it partnered with Harrison Street Real Estate and National Farmers Union Mutual to create a new platform to fund seven of its initial schemes with Moda.

Planning was granted for the 42-storey skyscraper at 212-223 Broad Street, Birmingham in December 2017. Future residents will be within walking distance of the city centre and new HS2 terminal, with Broad Street and the surrounding area also undergoing massive regeneration.

The £184m GDV scheme is being delivered by Apache Capital Partners and Moda Living, an owner, developer and operator of private rented housing.

Moda and Apache Capital are seeking to raise the bar for renting across the country and its 481-home project on Broad Street will feature around 31,000 sq. ft. of amenity space, including co-working areas, communal lounges and dining facilities, with a heavy focus on health and wellbeing.

A three-storey podium with a rooftop running track, the first in a UK residential development, will also house an additional 35,000 sq. ft. of retail and commercial space.

Birmingham is Europe’s youngest major city with 40% of people under 25 years old and 22.5% between the ages of 20 and 34. Although one in five households rent privately (over 220,000 people), there is a severe lack of professionally managed rental accommodation in the city with only 500 build-to-rent units in the market.

“We’re delighted to partner with Goldman Sachs for their first UK multifamily deal. Our platform with Harrison Street and NFU Mutual has shown that there is significant institutional interest in residential property and in spite of Brexit, demand for defensive, long-term income streams continues to thrive.

“Birmingham has incredible long-term investment potential with considerable investment underpinning new infrastructure and employment. The city council have a lot to be proud of and its support of build-to-rent will pay huge dividends as Birmingham looks to further expand its skilled workforce and retain great talent.”

“We are delighted to be backing Apache Capital in Birmingham. This transaction continues our originate-to-hold strategy for large loans against high quality projects with excellent sponsorship, strong market fundamentals and resilient cash flows.

“We are passionate about moving the bar for rental housing and I hope this visionary scheme can play a party in ushering in a new class of housing to Birmingham. We want to demonstrate that renting doesn’t have to be a necessity but a lifestyle choice too.”

Together, Apache Capital and Moda have one of the UK’s largest multifamily housing pipelines with 6,500 apartments across nine cities in England and Scotland.

Apache Capital recently sold a 458-bed purpose-built student accommodation scheme in central London to a joint venture between Greystar, PSP Investments and Allianz Real Estate for over £160m. Funds from the disposal will be reinvested into the BTR pipeline with Moda Living. 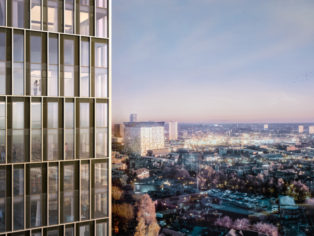 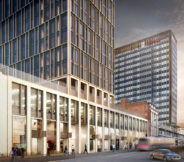