Redrow’s upmarket Lytham Quays development in Lytham, Lancashire, has picked up a yet another prestigious award.

This time it’s the luxury apartments at Beacon Point that have scooped the accolade for ‘Best High Volume Housing Developer’ at the regional phase of the LABC Building Excellence awards.

It now goes forward to complete nationally against other housing projects from around the country.

The awards are judged by a panel of building professionals and they recognise developers for the quality of their workmanship, the way they adhere to building regulations, plus safety, site presentation, welfare and other key issues.

After collecting the award at a ceremony at the Macron Stadium in Bolton, Lesley Myers, area sales manager for Redrow Homes (Lancashire), said:

“We’re thrilled to be picking up yet another award for our homes in Lytham. The accolade is fantastic news for people who’ve invested in Beacon Point and they can be assured that they’ve purchased a home at one of the region’s best developments.”

Judges said Beacon Point had won the award because it was a beautiful development that enjoyed stunning uninterrupted vistas and was built to very high construction standards.

Regional winners are automatically short-listed for the LABC grand finals which are held in London in the autumn.

This new award for Redrow’s Lytham developments follows Beacon Point receiving Highly Commended in the ‘Apartment’ category of the UK Property Awards at the end of last year.

Previously to that, the Admirals Reach show home at The Villas was named ‘Best Family New Build’ at the 2013 Northern Design awards; and The Villas were also highly commended in the ‘Residential Development’ category of the 2013 UK Property Awards.

Now sold out, Beacon Point, is a collection of one and two-bedroom apartments in several different styles, plus six luxurious duplex penthouse apartments with two, three and four bedrooms.

The good news for would be homebuyers still looking to splash their cash in Lytham – a town known for its fashionable café bars and restaurants, chic boutiques and championship golf courses – is that Redrow has two luxury detached villas remaining at Lytham Quays, with prices from £1,150,000.

Each five-bedroom detached, multi-storey residence has been designed to focus firmly on family life with an abundance of room, a spacious open plan kitchen/dining area, sumptuous guest suite and balconies to take advantage of the magnificent views. There’s even provision for a cinema room or gym. 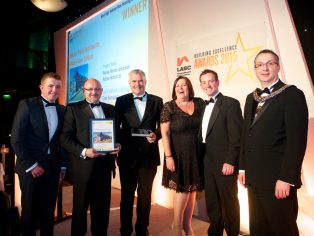