Surface Design Show 2014 has upheld its position as the leading Show for innovative interior and exterior surfaces among industry professionals.

Now in its 11th year, the Show proved an even bigger draw for key interior design and architectural studios such as Zaha Hadid Architects, Jestico + Whiles, Foster + Partners, Studio Egret West, Sheppard Robson, Based Upon and Hawkins\Brown who flocked to the only UK event to focus exclusively on surfaces.

Exhibitors were delighted by the large number of visitors to the show and the results they achieved.

The show opened with a fun and informative debate entitled ‘Traditionalism, Modernism and the Vernacular’. Architect and radio and television broadcaster Maxwell Hutchinson discussed and debated the role of materials in architecture and the vernacular in the built environment with a dynamic panel of speakers.

Cany Ash of Ash Sakula chaired the popular and lively PechaKucha evening which saw presentations from some of the most influential and innovative designers such as Adam Furman, Ron Arad; Pia Pelkonen, Ardesia Design; Mark Ridler, BDP Lighting and Marc Thomas, Millimetre.

On the final day of the Show the winners of the Surface Design Awards were revealed. Hosted by Annabelle Filer of SCIN and with a keynote address by Sarah Featherstone of Featherstone Young, the winning projects spanned the globe from the UK, Belgium, USA, UAE, China and Japan, with Squire and Partner’s Mayfair House winning the ‘best of the best’ Supreme Award.

Finally, one of the highlight of the event was the launch of Light School, the Show’s new focus on lighting, presented by Sharon Stammers and Martin Lupton of Light Collective. The ‘classroom’ was host to a number of leading members of the lighting design community presenting tutorials to a packed audience who left ‘Inspired by Light’.

“Light School was created as we believed the Surface Design Show was the best platform to share our lighting knowledge and inspire the architectural and interior design community. The fact that every talk had people spilling out the door of the school room means there is a need for it. The program was enthusiastically received and we hope to be back in 2015.”

“The show was a huge success. There was a real energy in the hall and the exhibitors were greatly encouraged by the number of serious buyers it attracted.” 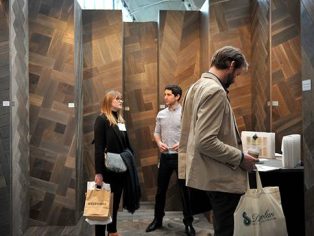