An embarrassment of riches at the British Homes Awards

It is always nice to mix housebuilders and architects in the same room without a fight breaking out, which never happens at the Sunday Times British Homes Awards, sponsored by Homebase for the second year.

At the sell out awards presentation lunch, in the London Marriott, a well-behaved collection of senior housebuilders and outstanding architects celebrated the Best of British home design, property construction and community regeneration.

With all awards there are both winners and those that receive commendations. However, the Sunday Times British Homes Awards is a real showcase of what is good about the country’s homebuilding industry and its supporting players.

On the winning side Affinity Sutton picked up the Affordable Housing Development prize for its Elephant Castle, Royal Road scheme.

The judges could not split Crest Nicholson’s Birmingham City based Park Central community and Countryside’s Abode development in Cambridge and recognised them as joint Development of the Year winners (over 100 homes). In the same category but at the other end of the size spectrum (up to 25 homes) Pembroke in Sheen, by Richstone Properties, took the honours and (26 – 100 homes) Grainger’s Macaulay Walk (pictured), designed by Assael Architecture, walked away with this and the Mixed-use development prize. Assael Architecture also took home the Architect of the Year award.

It is hoped that the government, in its commendable head long rush to build the homes the country so desperately needs, pauses to study the numerous examples of homebuilding excellence demonstrated by all the winning and commended entries to the Sunday Times British Homes Awards.

All winners can be viewed at: www.britishhomesawards.co.uk 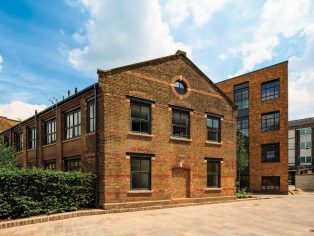