As part of the Towards Sustainable Cities (TSC) research programme, my practice Michael Stacey Architects, working with KieranTimberlake, architects of the new American Embassy in London, quantified the in-use carbon benefits of aluminium in architecture and the built environment. In this article I focus on three diverse case studies from this research: the New Bodleian Library in Oxford (1940), The Hive, Milan (2015) and the i360 in Brighton (2016).

In the heart of Oxford’s historic centre, the Sir Giles Gilbert Scott-designed New Bodleian Library was built as the Bodleian Library has reached full capacity. A grade II listed building, it  was constructed on a  spacious site to the north of the original library between 1936 and 1940. The windows were fabricated and anodised by James Gibbons, circa 1938 and installed in 1939.

The recent refurbishment of the New Bodleian Library by architect WilkinsonEyre included a significantly improved and fully accessible entrance sequence. During the refurbishment the anodised aluminium windows only needed to be cleaned and re-glazed as the anodising, which was tested during 2013 as part of TSC research programme, was in good condition on all the windows sampled, ranging from 7.1 to 30 µm. WilkinsonEyre avoided the need for secondary windows by careful environmental design.

When the New Bodleian Library first opened in August 1940, it received very mixed reviews from J.M Richards and Nikolaus Pevsner.  Reinvented by WilkinsonEyre and reopened in March 2015 as the Weston Library, in honour of the £25m donation by the Garfield Weston Foundation, it now has a very positive public role in Oxford and has been shortlisted for the 2016 Stirling Prize.

Designed by artist Wolfgang Buttress and centrepiece of the UK Pavilion Milan Expo 2015, The Hive was reassembled at Kew Gardens in London and opened to the public on 18 June 2016. This pavilion highlights the role of the humble honeybee as a key pollinator of crops and the current risks to the well-being of the apian population. Buttress observes: ‘Bees are incredibly sensitive to subtle variations and changes in conditions and their environment…so the bee can be seen as a sentinel of the earth and a barometer for the health of the Earth.’

With its 169,300 components using 50 tonnes of mill-finish aluminium, The Hive is an exemplar of design excellence and design for disassembly (DfD) enabling the reuse of the pavilion without waste, as all the details are fully reversible. The Hive was fabricated and installed by Stage One, who used laser cutting, waterjet cutting, and machining to fabricate the components. It is a fascinating combination of Euclidean geometry and accretive complexity that is probably only possible using 3D computer modelling. Forming a 14 m cube with a 9 m spherical void at its core, it is lifted 3 m off the ground plane by 18 circular hollow section steel columns. In the void at the core of the Hive, visitors experience sound and light that is a direct response to beehives at Kew.

The bespoke LED light sources respond to accelerometers within the beehives. For Toronto architect Philip Beesley, the Hive “exemplifies a deliberately unstable, open boundary, defined by delicacy and resonance – perhaps the very antithesis of the firmness that has defined Western architecture since Vitruvius uttered his famous paradigm.”

In Brighton on 4 August 2016 the first ‘flight’ of the British Airways i360 took off. Designed by Julia Barfield and David Marks, architects of the London Eye (2000), it is a vertical pier located at the entrance to Brighton’s old West Pier. Although the i360 shares design DNA with the London Eye, it has been tailored to work successfully as a regional attraction within a seaside city.

Over four million people visit the Eye annually and the i360 targets about one million visitors a year. Brighton and Hove has a population of over 280,000 people with about 10 million tourists visiting the city each year. The i360 is a ‘vertical cable car’ with a single pod that has a capacity of 200 people. It is simultaneously a venue, a destination and a symbol of renewal.

The i360 is 160.469 m high and only 3.9 m in diameter, officially the slimmest tall tower in the world, with a width to height aspect ratio of 1 to 41.15. To reduce vortex shedding on this elegantly slender tower, Marks Barfield Architects has clad it in 5 mm thick expanded aluminium, which is finished in 25 μm silver anodising in accordance with BS  3987:1991.

This preformative cladding also provides a transparent veil to the tower.

Produced by the Expanded Metal Company and coordinated by James & Taylor this veil was installed by Hollandia. The 2m tall lightweight expanded aluminium cladding was roll formed to a radial panel width of 3.2 m, weighing only around 10 kg per m2. One advantage of forming facade panels from expanded metal is no off cuts are produced, unlike perforating sheet metal with a punch tool.

All structures have a natural vibration frequency, a product of the slenderness ratio and stiffness of a structure. The i360 tower has three modes of oscillation, which are the three lowest natural frequencies of vibration this tower will respond to. The starting point to eliminate the risk of wind-induced vibration was the specification of the expanded aluminium cladding to minimise vortex shedding.

“The expanded aluminium cladding is a key part of the damping strategy, the surface roughness and air blowing through the cladding disrupts the wind speed thus minimising the vortex shedding on the leeside.”

Aluminium was selected in competition with grade 316 stainless steel. The expanded panels with their many edges and the coastal location convinced Marks Barfield Architects that anodised aluminium was the better option, offering a service life of over 80 years. Knowing that the cladding will need to be washed on a regular basis, the tower is crowned by a circular rail to support abseilers. Used wisely, aluminium has a key role in creating sustainable cities.

Towards Sustainable Cities reports can be downloaded at www.world-aluminium.org/publications. 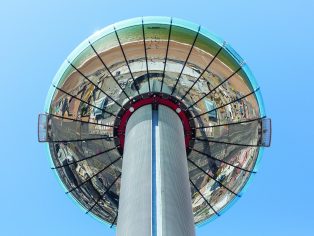 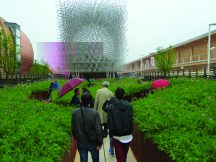 The Hive, Milan on its opening day, May 2015 © Fahad Mohammed