The winner of the 2015 WAN Education Award is announced today: Allford Hall Monaghan Morris (AHMM) with their University of Amsterdam project has won this year’s Education Award. Running for the seventh year, this award celebrates the best of international educational architecture and acts as a benchmark for excellence across the education sector. It honours the outstanding contribution of the world’s best architects for the education sector who are driving innovation and delivering outstanding results.

The esteemed jury panel included the 2014 winner: Dorte Mandrup Arkitekter’s founder and owner, Dorte Mandrup, as well as Head of Design from Lend Lease Lucy Homer, Malcolm Reading from Malcolm Reading Consultants and Founding Director of Stanton Williams Architects, Paul Williams, who all agreed that the six shortlisted entrants “submitted outstanding projects and schemes”. But AHMM really impressed the judges by “going above and beyond its expectations” and showed that its University of Amsterdam project addressed all key elements of the brief and really enhanced the learning environment to its full potential.

The project regenerates a post war campus in the heart of the Dutch capital. AHMM’s scheme performs radical surgery on two utilitarian buildings, stripping them out, cutting them open, reconfiguring their insides and knitting them back into the city’s fabric in a very ‘clever’ way.

In the early 1960s Dutch architect Norbert Gawronski was commissioned to design a new complex for the university in Roeterseiland, to the south east of Amsterdam’s Centrum district. His master plan envisaged a long L-shaped slab block, extending over the canal, with a tower to its north and west; all were to be linked at first floor level by walkways and stairs rising from open piazzas. By the early 21st century, the issues caused by only partial realisation of Gawronski’s master plan needed to be addressed. The slab block cut the campus in two and formed a barrier; alongside was the blank wall of the podium. AHMM re-examined the complex, “innovatively restructuring” these large, robust buildings, and made them work more effectively within the city, reinforcing but enhancing the Gawronski scheme, and creating “better learning experience”. 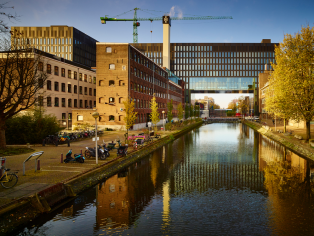