Global infrastructure services firm AECOM and 7N Architects have secured Planning Permission in Principle consent from Glasgow City Council for their masterplan for the University of Glasgow.

The masterplan provides a development and placemaking framework for a significant expansion of the University’s Gilmorehill Campus on the site of the former Glasgow Western Infirmary in the heart of the West End of the city. It will provide up to 85,000 m2 of learning, teaching and research space within a mixed use quarter, which will integrate the historic core of the campus with the surrounding neighbourhoods to the west and form a new frontage to Kelvingrove Park to the south.

AECOM and 7N Architects collaborated on the design of the masterplan, which is focused on creating an environment that will strengthen the University’s position as one of the world’s leading research intensive universities. The placemaking approach uses the public realm as the spatial framework to cultivate social and intellectual interaction between colleges and stimulate collaborative learning and research. The AECOM-led team also includes Simpson and Brown, Muir Smith Evans and Spaces that Work.

The consented masterplan will be delivered on a phased basis and will be governed by extensive design guidance prepared by AECOM and 7N Architects. The guidance will inform the design of the buildings in terms of form, height, massing, frontages, articulation and materials to give coherency to the new development within the historic context of the Gilmorehill Campus.

Professor Anton Muscatelli, Principal and Vice-Chancellor of the University of Glasgow, said:

“We are delighted that Glasgow City Council has endorsed our ambitious plan which we believe will be a major economic driver for the city and for Scotland as well as underpin this University’s world-leading position.

“The decision to approve the masterplan is pivotal to allowing us to start this development. An initial financial envelope of around £430m will be spent over the next five years on the first phase of the project. It is part of a wider £1bn investment which includes significant spend on refurbishing and improving the existing estate. This will be one of the biggest educational infrastructure projects in Scotland’s history and is certainly the biggest development undertaken by this University since it moved to Gilmorehill 150 years ago.”

“Our aim for the masterplan was not only to create a collaborative learning and research hub for the University in the West End, but also set a new trajectory for the Gilmorehill Campus within Glasgow, affirming its integral role in the city’s life and future economy. Development will transform the campus with world-class facilities while sensitively reflecting the historic character of the city’s West End.”

The Planning Permission in Principle consent was granted at a Glasgow City Council planning meeting yesterday. 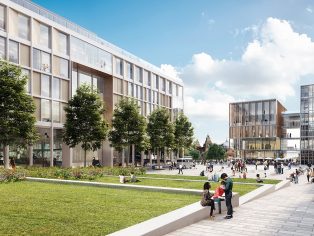 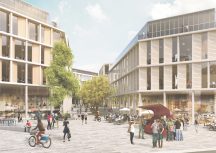