A major development is set to transform the Torrens riverbank in Adelaide, South Australia, into a world-class entertainment precinct.

The $600 million Festival Square investment will be put towards a multi-storey office tower, new restaurants, bars and shops and a large underground carpark.

Riverbank Authority chairman Andrew McEvoy claimed the city’s following into the footsteps of London and Baltimore by developing the riverside area.

“Adelaide is a world class medical city and university city, and in the middle of all that, will be an entertainment precinct with workers and life and vibrancy. We would love it to become the place where Adelaide locals love to go, and if locals go there they tend to attract visitors.”

The Festival Centre will receive its first major upgrade since 1973 and the Adelaide Convention Centre will also undergo a multi-million renewal and expansion into a multi-purpose facility with plenary capacity of up to 3500 seats. The nearby casino is finalising the design of its planned expansion.

The Adelaide Convention Centre CEO Douglas Gautier said he “can’t think of any other Australian capital”  with so many entertainment facilities in such close proximity.

“It’s only once in every 40 years that you get something like this and now I think we are at that point where there is an opportunity for us as a community to grab it.”

“We do events and arts and entertainment very well so aggregating it in that way in a fantastic location will stand us in very good stead not only in terms of local benefits but also in terms of visitor benefits for decades to come.”

The Festival Centre upgrades will begin in 2016  but construction across the riverbank may last at least six years with McEvoy eyeing “real progress by the start of 2018”. 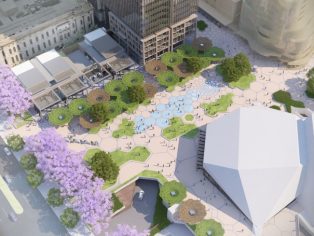