A modern Renaissance man, Danny is a highly regarded author, actor, columnist, screenwriter and radio and TV presenter. Starting out as a writer on Dead Ringers and The Mighty Boosh, Danny has become a prolific writer of both comedic and conventional novels, including his first solo book, Join Me, and his second book, Yes Man. This hit book later became the basis for the blockbuster film starring Jim Carrey.

“It is with great pleasure that we announce Danny Wallace as the host for this year’s CEDIA Awards ceremony. A natural presenter and comedian, Danny is sure to make the awards a lively night of humour and great entertainment. With a show-stopping venue, a strong set of finalist entries and now with Danny Wallace confirmed as our host, it is without a doubt that this year’s awards will be a night to remember!”

Danny will award the winners of CEDIA’s best projects in smart home integration, including the best media rooms, home cinemas, integrated homes and super yacht installations across the EMEA region. Ticket sales for the event have now surpassed the 400 mark, breaking last year’s previous record of over 350 attendees. 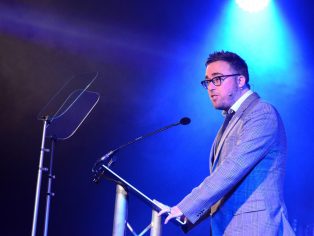