The designs are a modern interpretation on traditional Cambridgshire architecture, and combine ‘city’ style with a traditional village layout. The development provides 306 new homes and offers stylish two-, three-, four- and five-bedroom houses as well as contemporary studios plus one-, two- and three-bedroom apartments. Abode forms a gateway to the wider village of Great Kneighton, Trumpington, which brings with it a wealth of proposed new amenities, a country park, plus transport links to Cambridge city centre and beyond.

Abode has been honoured by a housing design award, which praised an architectural approach that recognises the importance of different types of housing and the appropriate amount of open space around them. The award noted how well the designs gradually change from the landmark Great Court entrance, through to urban mews housing and then to green lanes, which blends the development with its green surroundings.

Every property at Abode offers advanced eco-friendly features, minimising residents’ impact on the environment and helping to make savings on everyday energy and water bills. Examples of these eco-friendly features include photovoltaic panels, highly efficient heat recovering gas boilers, mechanical ventilation and heat recovery systems, which moderate the temperature throughout the home. In addition, a car club is set to be provided, which will offer residents a cost effective and greener alternative to owning and running their own car.

“Abode illustrates our long-standing commitment to commissioning good design. The development is providing a great place for residents to live with its own style and character, yet the roots of its design ethos come back to the mellow style of traditional Cambridge.”

Countryside’s new community at Great Kneighton, Trumpington, is located on the southern edge of Cambridge city centre and is less than two miles from Addenbrooke’s Hospital. It is providing much needed new homes for the Cambridge area. The Great Kneighton community will include proposed new schools, shops, recreation, community and health facilities, as well as a 120 acre country park that is over four times the size of the open space in the centre of Cambridge known as Parker’s Piece. This public open space will provide the local community with plenty of parkland, including wetlands and a bird reserve, allotments, an adventure playground, extensive woodlands, parkland sculptures and sports facilities for the planned secondary school.

The new homes at Abode include cycle parking areas which meet the Code for Sustainable Homes Guidance and residents benefit from Great Kneighton’s extensive new network of footpaths and cycleways. It is just a short walk from the existing bus services using Shelford Road and the new Cambridge Guided Bus runs right through the development offering fast links to the city centre, train station and Addenbrookes hospital. The city Park and Ride is also close by, so the centre of Cambridge is within easy reach.

Travel links are excellent with Cambridge train station hosting frequent services to London’s Liverpool Street and King’s Cross stations as well as to Stansted Airport. The M11 is close by, providing a route into London, passing Stansted en route, while the A14 almost circles Cambridge and gives access to Newmarket, Huntingdon and Norwich. 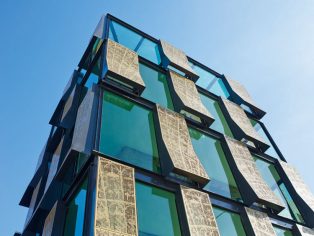 A marker building at the gateway to Abode 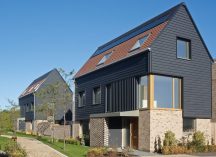