A warm welcome at the care hotel

Deep in the heart of rural Essex, a building that heralds a new approach to high-quality residential care for older people has opened its doors. Ray Philpott discovers what makes it different

With an ageing population that’s growing year by year in the UK, it’s never been more important to ensure those who are no longer able to live in their own homes are cared for in a decent environment.

On top of this, more and more older people in care have dementia, a disease that places extra demands on the running of residential homes, many of which are simply not designed or equipped to deliver the kind of support required.

With these demands firmly in mind, forward-thinking husband and wife team Mike and Jacqueline Volf worked closely with Tim Snow Architects to develop a concept that takes residential care to a new level – the care hotel.

Arguably the first establishment of its kind in England, Mistley Manor has been deliberately named to sound traditional and old fashioned, yet it’s underlying ethos is anything but that.

Put simply, the idea is to provide a high-quality, up-market residential care facility that looks and feels more like a comfortable hotel than a residential home. Many people who need care today have had comfortable lifestyles and want that to continue for as long as possible.

Nestling on the outskirts of the pleasant Essex town of Manningtree, Mistley Manor boasts hairdressing and beauty/therapy salons, a cinema room, licensed bar-cafe, library area and restaurant with carefully installed, high quality elements as part of the interior design. There are also rooms and spaces where residents, their friends and families can enjoy fully-catered gatherings to celebrate special events and lounges in private if they wish.

In keeping with the hotel-based concept, it has a large, airy reception area and a number of comfortably appointed lounges where residents can take in view over the gardens. The landscaped grounds contain one and two-bedroom assisted-living bungalows where, rather surprisingly, couples can live together and enjoy their own personal outside space on patios and garden areas. There are even luxury penthouse suites on the top floor.

High-speed broadband and wi-fi is available across the site, enabling increasingly IT-literate residents – or at least those with good mental capacity – to keep in touch with friends and family in the outside world through Skype, email and social media.

Retro for a reason

The care hotel been designed from the ground up as a spacious, pleasant, brightly lit building that is an enjoyable place to be for all residents, whether they have dementia or not and, crucially, a pleasant place for visiting relatives and friends, too.

“Mike and Jacqueline wanted to deliver a step change to the way residential care for the elderly is delivered. Part of that concept is that it should be a place visitors actually want to spend time with their loved one or friend, in a way that simply isn’t possible in more conventional homes.”

At first glance the 5,100m², three-storey, 60-room main building with its clay-tiled pitched roof and brickwork looks rather like a large 1920s country house hotel. Built on the site of the Volf’s former residential home, Little Manor, its retro-style is a carefully considered design choice.

“Dementia sufferers have better long-term memory than short-term, so they struggle with new things and are more comfortable with the familiar. Inside and out the building should not feel new and unsettling. We were also keen to provide demedicalised, more human environment. We considered a contemporary look initially, but took inspiration from early 20th century country houses. It can be filled with familiar décor and features that are reassuring and suggest comfort to the target age group.”

Building work began in March 2013 and was completed by December 2014, with the official opening held in January this year.

“The building’s traditional brick construction is actually a very cost-effective and fast way to build because, as Mike Volf points out, there’s no shortage of bricklayers in this part of Essex and it’s very much the standard way to build. Compared to modular or prefabricated construction, it offers greater opportunities for making ongoing design changes or minor improvements to the building – and we had quite a few.”

Inside, each floor has a single long, 3m-wide corridor running along its length like a spine, with facilities and accommodation on either side and light coming in from fenestration along the length.

Snow points out these unusually wide corridors are an important, practical feature in a healthcare environment.

“Many institutions have corridors that are simply too narrow and not really suitable for people with mobility issues let alone those who may also be confused or have poor vision. We created very wide corridors on each floor of Mistley Manor, having identified the need for plenty of space in corridors as a crucial feature. They enable people to manoeuvre wheelchairs, walking frames and other support aids and to keep the general traffic flow of  people moving smoothly. We’ve also included wider doors for the same reason.”

On the ground floor are offices and all the shared communal and family facilities, along with a few residential room with patios. At its heart is a virtually open-plan area consisting of a formal restaurant-dining area flowing into a bar-cafe surrounded by casual seating extending into the conservatory and overlooking the grounds. This area has been carefully designed to actively encourage social interaction between the residents, and between residents and visitors.

In contrast, the first floor consists primarily of standard rooms and is the area most focused on residents with dementia. It has two communal lounges where people can meet or sit to view the grounds and enjoy daylight, a great benefit for dementia sufferers. However, these areas are enclosed and safe.

“With dementia there is always a conflict between the need for residents to experience freedom and normality while keeping them safe and secure at the same time,” says Snow.

The third floor hosts the top-of-the-range Penthouse suites which have their own luxuriously appointed lounge areas and separate bedrooms. It is the airiest and brightest area of the building having glass panels running along the length of the roof apex flooding the corridor below with daylight.

“In many ways it functions like a street,” adds Snow. “There are seats along the way where people can stop and talk and rest, once again encouraging interaction. “Throughout the building, wherever we could we’ve tried to let in as much natural light as possible through large areas of glass. We’ve provided good ventilation and generous room heights with large bright and airy communal areas to create solid standard for the future.”

The four assisted-living bungalows reflect same style. With their own private grounds and living space, they offer a rare opportunity for couples to live together and are ideal where one is a carer but also needs a little support to do the job. Here, residents enjoy greater independence but have all the facilities and benefits of the main home available to them. Should the time come when the bungalows are no longer suitable they can migrate to the main home.

The interior design detail is in line with the recommendations of the internationally renowned University of Sterling Dementia Services Development Centre (DSDC), experts in designing buildings for dementia.

“We worked with Hertfordshire-based interior designer Tina Davies Childs who has experience in designing for care homes and is very tuned into the DSDC way of doing things,” adds Snow.

Simple, things like door handles, bathroom fittings, curtains, fittings and soft furnishings have to be considered carefully to avoid confusing or alarming residents with dementia. For example, mirrors should not be sited anywhere outside bathrooms and toilets because dementia sufferer could become distressed if they unexpectedly come across their own reflection and don’t understand what it is.

Likewise, old fashioned bath and sink taps are better than clever modern ones because they are familiar to older people who can more easily remember how to use them. Colour contrast between various surfaces – such as doors and door frames – helps dementia sufferers avoid situational confusion when moving around. Inconsistent light intensity and highly reflective surfaces are also to be avoided.

Mistley Manor has strong green credentials too. It’s completely LED-lit and with every single light switched on it uses a tiny 4kw an hour, while thirteen solar roof panels preheat the hot water system up to 50 degrees.

Immensely proud Proprietor Mike Volf is happy with what’s been achieved by the £7 million project.

“I’m immensely proud that we were able to build it within the timescale we did and to an impressive quality and standard.” Volf says: “I think we’re achieving that. People who see it are impressed and can scarcely believe it’s a residential care facility because, thanks to the way it’s been planned, built and designed, it really does look and feel like a high-quality hotel.

“It’s the culmination of years of being asked ‘where would you put your mum and dad?’ Ultimately though, the big question is: would we want to live there ourselves? I can honestly say the answer is yes.”

Mistley Manor may be not be a typical home, but it’s certainly blazing a trail for the future of high-quality residential care. 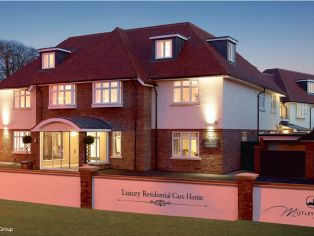 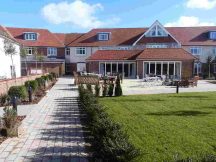 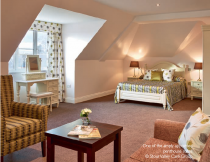 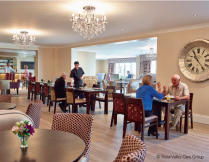 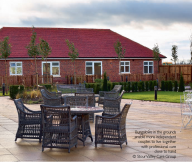