With its original height having been restricted during the First World War, the UK’s first concrete framed building has finally reached its original potential thanks to a glazed addition that provides a thoroughly modern workplace. Mark Smulian reports.

Anyone crossing Brook Green, a park 184 Shepherd’s Bush Road was built in in Hammersmith, west London, will be in close proximity to a radically refurbished listed building, but they may miss both the building and its key design feature unless they look closely.

If they do notice the building, they may wonder why 184 Shepherd’s Bush Road looks rather squat – surely a building with such a large footprint should be taller?

Look again. Although it is hidden from Brook Green by large trees, 184 Shepherd’s Bush Road has had a vast domed glass roof fitted, transforming what was a three storey building into a six storey one.

1915-16 as a garage and showroom for the Ford Motor Company in the early days of car traffic.

It had been designed as a five-storey building but shortages of raw materials during the First World War meant it ended up with only three, providing 117,000 ft².

The building was later used by Citroën as its UK distribution and sales centre and then by lighting firm Osram – which has left a small but significant legacy at the site – and most recently, as a self-storage facility.

Westerland Real Estate, which owned it, wanted the building to have a more prominent use and asked architectural practice Collado Collins to initially make suggestions as to what this might be.

Hotel and residential uses were considered but discarded and eventually refurbishment as an office was chosen.

The building had been built using the then-revolutionary concrete frame technique, but by the time Collado Collins became involved almost 100 years later this frame was showing wear and tear.

Other than the structural elements, only a few original features – including mosaic floors and wood panelling – remained on parts of the former ground floor showroom area and a small space thought to have originally been a customer reception area.

Collado Collins’ chosen design was for an open plan office space, as having been built as a car showroom, the building has high ceilings and was ideal for conversion into offices.

While the work needed to refurbish the interior would be comparatively straightforward, the problem was how to create enough space to make it attractive to a potential occupier?

Being listed as Grade II major alterations were out of the question, and the London Borough of Hammersmith & Fulham planning authority was concerned about maintaining views and the building’s relationship to its surroundings.

Collado Collins lead architect Sanja Tiedemann explains how the solution lay in the roof: “The roof was flat as in the original design, but in 1915-16 the building was designed to be five floors high, and even though only three were built the structure could take five floors and two cores popped out above roof surface which would have been for these floors.”

She continues: “We put in a 1.5 metre transfer zone. On top we placed the new domed glazed roof, which utilises the existing structure.”

The 1915 version would have continued the concrete frame upwards but the new dome is a steel frame with glass to reduce weight, which meant three floors could be fitted on the original roof beneath the glazed dome.

“We wanted to achieve height without it being seen from the street, with low intrusion on the neighbourhood,” she says.

One option was simply to build upwards but, the architect confirms, “the council said that was a non-starter as it did not look proportionately right”.

Another factor to be considered was that the building next door – now used by retailer Tesco and a housing association – was once part of Osram’s operation, and a striking cupola remains from this. Planners wanted to retain visibility of this from the road from central Hammersmith and simply building upwards would have obscured it.

Tiedemann says: “In conversations with planning officers they initially assumed we could only add a single floor, but we opted for a curved roof that slants back, so the closer you get, the less you see of it. Because of the geometric proportion of the roof we accommodated three floors in there.”

The roof is a tubular steel structure with steel nodes and the glazing is a mix of transparent and opaque panels to control solar gain.

“We retained the parapet and built the transfer zone so the only connection between the roof and new floors is on the fourth floor and at the top”. Facade contractor Seele prefabricated all parts of the roof and transferred them to the site.

The 50,000 ft2 roof extension is a diagrid glass roof, which presented several challenges such as predicting how comfortable it would be to situate a working environment under a large area of glass.

The roof’s curve left limited space for plant, which is accommodated in a well at its centre.

Hilson Moran director Martin Murphy says: “Complex redevelopment schemes such as this require modelling and analysis to ensure the right building services systems and solutions are in place to create an optimum workspace, in this case both in the new extension and in the historic listed building.”

Below the roof, Collado Collins had to devise a way to use the existing building. Aside from it being listed, the new occupant – retail customer information provider Dunnhumby – came on board early and wanted to keep the large open spaces to facilitate its style of working.

Tiedemann says: “Once we got full access we started looking at structure and load and slabs, which are the first of their kind in terms of concrete framework, which is the reason for its listing.

“This technique had not previously been used in the UK and we found a lot of honeycombing had occurred along the edges of columns and had to re-inject them and do some work to the slabs,” she adds.

“Some columns were replaced like for like, but it was in pretty good condition and did not need any new columns to support the roof.”

Collado Collins reinstated the floor and retained the ceilings and timber panelling. The smaller core was removed and what had been a loading bay at the rear of the building was partially incorporated into the structure, retaining some of the original features but now serving as both a conser

vatory that is an extension of the office space and an outdoor gym.

“Dunnhumby got involved very early on and we managed to incorporate a lot of their variations, such as a new atrium space at the back, as they wanted to retain the very industrial character,” she says, adding that “their philosophy is that staff ‘hot desk’ and can work anywhere – I think everybody has their favourite corner of the building”.

One staircase connects all floors, and there are four lifts and toilet facilities within the core.

The building being listed also meant that little could be changed on the building’s exterior. The brickwork was simply cleaned but otherwise left undisturbed.

The windows were still the original ones which had been supplied by manufacturer Crittal. The frames had been painted white but proved to have originally been Buckingham green.

“We contacted Crittal to see what we could do and they said it would make more sense with sustainability issues and the building becoming an office space to replace them, so we got Crittal windows which were an exact match for

“The council was happy to discuss colours and we went for a more industrial feel with dark grey,” she adds.

There is clearly a limit as to how
much the sustainability features expected in a new building can be incorporated into a century-old listed one, although Tiedemann says there are elements of water retention with an attenuation tank, and there are measures to limit energy consumption – for example lights will turn off if no-one is present.

184 Shepherd’s Bush Road has won the Hammersmith Society’s environment award and has been highly commended by the Royal Institution of Chartered Surveyors. It has also been shortlisted for awards from the Royal Institute of British Architects and the British Council of Offices.

A century after wartime stringency deprived the building of its intended top, 184 Shepherd’s Bush Road has finally reached its full height – even if the original designers might not recognise it. 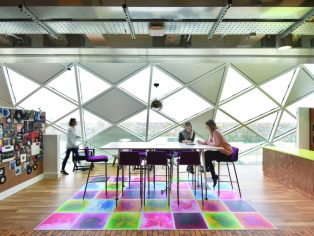 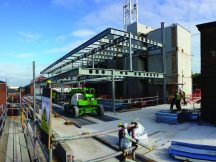