Nearly a century after Art Deco first lit up the luxury store and cinema screen, it remains as glamorous as ever. The style – variously known as Jazz Modern or moderne until the 1960s – was transported by ocean liner across the world from its origins in Vienna and Paris, offering a slick of sophistication and succinct design to rich and poor alike.

The style arrived in Britain in the late 1920s just as cinemas, hotels, theatres and factories were being built in large numbers. Yet despite its popularity, there have been few books that explain the what, where and how of Art Deco buildings and their architects; until now.

In Art Deco Britain, architectural historian and writer Elain Harwood brings her trademark clarity and enthusiasm to many of Britain’s finest interwar buildings. They include the Midland Hotel in Morecambe; Eltham Palace; Broadcasting House and the Carreras Cigarette Factory in London; Finella in Cambridge; Tinside Lido in Plymouth and many cinemas and theatres – but also lesser-known ice-cream parlours, factories and public buildings. Many of these buildings are still with us thanks to the Twentieth Century Society, founded forty years ago as the Thirties Society, and sales of the book will support its future campaigns.

Beautifully produced and richly illustrated, mainly with pictures specially taken for the book, this is a definitive guide to a much-loved building style.

Elain Harwood is a historian at Historic England specialising in the twentieth century. Her publications include England’s Post-War Listed Buildings and Space, Hope and Brutalism: English Architecture 1945- 1975. She has co-edited Twentieth Century Architecture, the journal of the Twentieth Century Society and 100 Buildings 100 Years, 100 Houses 100 Years and 100 Churches 100 Years, all published by Batsford.

The Twentieth Century Society is a charity dedicated to preserving the best in architecture and design since 1914. It celebrates its 40th anniversary in late 2019. 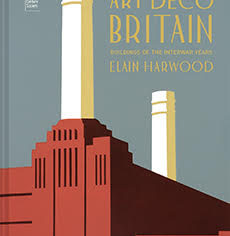