A new anti-ram standard – which could save businesses millions

Criminal ram raids are a costly threat to businesses. In the UK retail sector alone, the Association of Convenience Stores found that companies faced over £8m in damages from ATM ram raids last year with a further £38m for robberies and burglaries, the vast majority of which involved a vehicle impact. According to the most recent European ATM Crime Report, criminal attacks on cash machines across the continent increased by 230 per cent year-on-year in 2017. Businesses are taking action to protect themselves and a number of retailers have announced plans to install measures outside their stores as a result of a series of incidents where vehicles have been driven through shop fronts. But up until very recently, the range of accredited and tested protective measures that companies can use has been limited to those specifically designed for mitigating high-speed, terrorist vehicle attacks, such as the incident in Westminster in August. Criminal ram raids happen at lower speeds, which means architects and developers have had to resort to specifying untested ‘anti-ram’ products. The government has introduced Publicly Available Specification (PAS) 170 to address this challenge. This is a new set of accredited standards that can provide specifiers with access to assured security products designed to stop a vehicle of up to 2.5 tonnes travelling between 10 and 20 mph, as opposed to the greater weights and speeds tested to mitigate against terror attacks. The new standard offers greater flexibility and this provides architects and specifiers with a number of benefits. Together with helping them to protect commercial property and cut insurance premiums for businesses, it provides the proof of performance that the anti-ram solutions previously specified were unable to deliver. It also provides a quick and proportionate way of evaluating protective products, which means that manufacturers will be able to conduct a greater number of tests with a wider range of bollards. This makes them more cost-effective and provides greater choice when it comes to picking the right type of security product for a particular space. Following the latest round of testing at the Horiba MIRA crash test centre, Marshalls now has four bollard cores, which have been tested to the PAS 170 standard. All of these were put through their paces using a 2,500 kg trolley, with one replicating the impact of a vehicle travelling at 20 mph and the others at 10 mph. Each achieved a penetration distance of under 2 m – the limit for securing the certification. Once incorporated into pre-existing landscape furniture, the new standard will give architects and specifiers access to a more cost-effective and wider choice of products to protect properties. Going forward, it’s vital that solutions are available that are proportionate to the level of threat posed. 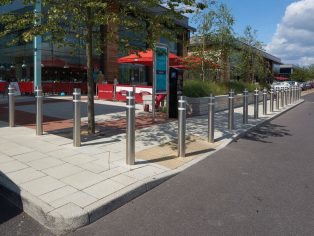 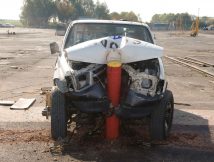