Caddick Construction enjoyed a double celebration at the Considerate Constructors’ Scheme National Site Awards this week (27 March) where two of its Leeds sites were recognised.

The prestigious awards are handed to only the top 11% of registered construction sites out of the thousands that are entered every year.

The high-profile £40m Emerald Headingley Stadium build was singled out for a Bronze Award, whilst an N-Power office renovation project, also in Leeds, picked up a Bronze at the ceremony at The Lowry Hotel, Manchester.

This is the third successive year the Knottingley-based company has been rewarded by the Scheme for its exceptional achievement, and recognised that its sites have made the greatest contribution towards improving the image of construction. Thousands of UK sites are registered with the scheme each year to be considered for an award and only a fraction achieve award status.

“We are delighted to receive two awards this year for projects that are very different in terms of challenges, size and complexity. The Emerald Headingley Stadium build is high profile and situated in a very built up residential area; the team are working incredibly hard to be “good neighbours” whilst the site is live.

“The £3.8m N-Power renovation project had its own very different challenges as the offices were occupied throughout several months of work. The team had to be extremely mindful of minimising disruption to staff, as well as health & safety being a No 1 priority.”

Caddick Construction, part of the Caddick Group PLC, has more than 35 years’ experience across a range of sectors including: commercial, education, industrial, leisure, refurbishment, residential, care, retail, mixed use and fit out.  It recently released its annual results which had seen its pre-profits rise by 30 per cent to £2.74m. 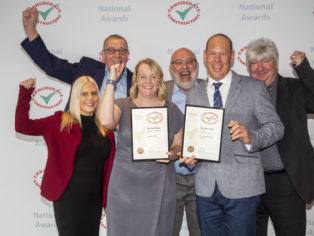