One of the capital’s great historic railway stations is on course to become the well designed, attractive transport hub it should always have been. Ray Philpott explores the role of architecture in its renaissance

London Bridge, the city’s first passenger railway terminus and among the oldest in the world, is being transformed into a 21st century travel portal.

Its 15 platforms are being covered by gleaming, sinuous, Grimshaw-designed canopies set above a huge street-level concourse packed with cafes, restaurants and shops. The redevelopment is part of Network Rail’s massive £3.6 billion Thameslink Programme to expand and improve the existing through-London Thameslink rail service that connects destinations to the north and south of the city.

Some £1.5 billion is being spent on the essential rebuilding of London Bridge Station and remodelling its associated track layouts to remove operational obstacles to the service.

From 2018 onwards, up to 18 Thameslink trains in each direction will call at the station every hour, serving a greater number of destinations than now. London Bridge will have nine through-service platforms and six platforms where trains terminate, ultimately handling up to 90 million passengers a year.

Built in 1836, London Bridge quickly became a confusing station with a split personality, thanks to the over-zealous rivalry of Victorian railway companies. Effectively, it’s been two stations on one location – one a terminus and the other handling through trains – with ever-changing railway buildings and layouts.

Traditionally, it’s been awkward to navigate, but the Thameslink Programme has given Network Rail an historic opportunity to create a fit-for-purpose building. Network Rail appointed a design team comprising architects Grimshaw and the WSPHyder joint venture company, working with main contractor Costain and its sub-contractors.

The new station forms part of the London Bridge Quarter regeneration programme that already includes iconic buildings like the adjacent Shard, The Place and a bus station.

At the centre of Grimshaw’s railway design is a new street-level concourse, roughly the size of Wembley Stadium’s football pitch and the biggest in the country. With entrances in Tooley Street and St Thomas Street, the concourse also serves as a north-south public thoroughfare that’s very much integrated into the local street environment, featuring a new public piazza in Tooley Street.

Stairs, lifts and escalators give passengers access to all 15 platforms on the level immediately above, covered by Grimshaw’s striking, twisting canopies. Often described as eyebrow-shaped, the shining, metal-clad flows of the canopies contain integrated, north-facing glazing that floods natural light onto both the platforms and concourse.

The concourse also offers direct access to the Western Arcade, a series of historic vaulted arches that have been extended to create a passenger link, lined with retail units, to London Bridge Underground station.

Finally, at platform level at the Shard end of the station, is the glass and metal Renzo Piano-designed ‘terminus concourse’ building, built as an integral part of the Shard development and already in use. Its primary role is to give passengers access to the lines that will terminate at the station and Underground services, and will also provide a link to the larger concourse.

With 55 million passengers using the hub every year, it’s simply not viable to close London Bridge for rebuilding, but keeping it operational means access and construction sites are highly constrained.

That’s why the work is being carried out in phases. Platforms and their canopies are being rebuilt two or three at a time and many of the steel and concrete structural elements are manufactured off-site and assembled section by section on-site.

Let there be light

A core driver behind the Grimshaw design is enhancing the experience of rail passengers and those enjoying the new station’s considerable retail and catering offering.

Andrew Byrne a Principle Architect at Grimshaw and lead architect for the project says:

“The station has never had a comprehensive design vision and has always suffered from piece-by-piece development. This was a disaster for users in terms of orientation and intuitive way-finding – the identity of the station was a mess.

“One of the key elements of the design is bringing down and bouncing around as much daylight as possible onto the platforms and the concourse to make the station environment pleasant. We’re using northern light, rather direct than sunlight from the south, which could cause technical problems on the concourse. This, combined with the concourse and platforms being classed as exterior spaces, means solar gain is not an issue. Consequently, a highly-secure but relatively untinted low-E glass has been used.”

“The sinuous nature of the various platforms are expressed in the roof. We have the silver twisting, curving, ribbon-like canopies, clearly distinguished as visual strips along the length of the station.

“We used anodised aluminium panels to reflect light, with the distinctive ‘eyebrows’ of the canopies twisting at 45 degrees so that we get as much reflected off that surface as possible. The canopies are largely devoid of services or fixtures enabling it to redirect light more efficiently.”

The fact that these are clearly defined, horizontal elements with breaks between them has enabled the project to be built in phases as required.

“Aesthetically, if we’d tried to create a single over-arching canopy we wouldn’t have been able to create the effect of delicate, elegant ribbons marching across in sequence,” Byrne continued.

“We also wanted to avoid large areas of flat, horizontal glazing which would be difficult to maintain and access. However, people will get a lot of opportunity to enjoy the sky and outside environment though the curved glazing.”

“Furthermore,” says Byrne, “the ‘eyebrows’ also help with way-finding and circulation by acting as a special architectural feature giving passengers a clear idea of where they need to be going.

“For many reasons the curving shapes are very practical, but we also believe they give the station a sense of unity and an iconic identity.”

Bearing unity in mind, a key challenge was was blending the Grimshaw building with the terminal concourse.

“The terminus concourse has a strong design relationship to the Shard, while we’ve developed a language of curves,” explains Byrne. “Our canopy design undulates where it needs to draw light down to the street level concourse then flicks up to create a complimentary transition to terminus concourse.”

The street-level concourse has been carved out of a complex maze of 19th century arches and vaults that support the tracks.

Grimshaw’s vision was to create a rich environment, a ‘public room’ for London – partly internal, partly external – that offers great amenities. The architects wanted the space to be easy to navigate and understand plus visually and physically appealing, inviting people to spend time there.

That means fundamental, large-scale structural features, like the bridge sections that support the track and platforms above, have to be treated with great care. Their size dictates that a substantial amount of artificial light – mainly LED – is still required. A carefully lit timber lining has been applied to these areas to elevate the space from the purely functional to something more aesthetically appealing.

“The cladding is made from a natural product and, by making this area feel more tactile, it strongly contributes to its success. Without it, the concourse could have felt rather inhospitable and more like being under a road overpass.”

In contrast the more contemporary-looking Tooley Street entrance retains very little of the old structures, and has been opened out into the street to form an attractive meeting place. Some of the original station structure will be used to house retail units on either side of the entrance.

However, it was necessary to demolish the attractive Victorian offices of the old South Eastern Railway in Tooley Street, which naturally upset some people. “Keeping the building was too limiting and we couldn’t move the concourse. Operationally it made the entrance difficult to understand and use and would have deprived the station of an essential emergency evacuation area.”

Another heritage-related challenge was the historic, Grade II-listed 1865 ‘train shed’ that housed the original platforms under a glass and metal barrel-arch roof. Everyone agreed the required track layout made it impossible to keep the building in situ. The brick walls supporting the steel and glass roof were demolished, but some of the metal columns and roof elements have been dismantled and will integrated into a railway museum building in Aberystwyth.

“It’s always a shame to lose nice Victorian architecture, but you have to consider the benefits to the overall scheme.”

Network Rail is pleased with the redesign and eagerly anticipating the launch of its bright new station in 2018.

“When the work is finished, for the first time ever it will feel like you are in one station rather than various bits of a building.

“In terms of design, service, image and presence, it will be out of this world compared to what was there before. It will possess a strong sense of destination – somewhere where you can visit or shop, whether you are part of the community or travelling.

“At long last, London Bridge is joining the Premier Division of London stations.” 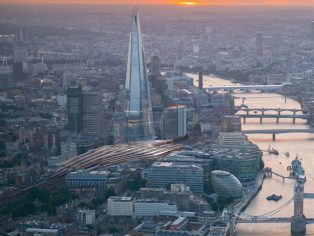 The platforms are covered by sinuous, metal-clad canopies, shown in finished form on the left of the image © Grimshaw