On behalf of CBRE Global Investors, the Leeds team of CBRE has sold the 88 acre former Lincoln Castings site in North Hykeham, Lincolnshire to Persimmon Homes and Sterlin Investments in two separate deals with each party purchasing 44 acres. The land was purchased for an undisclosed sum.

The Castings site, which has been vacant since 2006, is surrounded by lakes and countryside on the northern edge of North Hykeham, just four miles from Lincoln City Centre, and has been marketed as highly desirable for residential and mixed-use development.

A railway line separates the two sites which have been purchased as independent ventures. On the south of the line, Persimmon has purchased 44 acres which has outline planning permission for 300 homes and commercial space. On the north side of the railway line, Sterlin Investments has agreed a deal for 44 acres on which there is some outline planning permission for commercial and employment space.

The station servicing the site’s railway line has recently been upgraded and an enhanced bus service is in operation. Along with strong road links, the site has excellent connectivity for future occupiers either residential or commercial.

Director of Office Agency at CBRE, Jonathan Shires, completed the deal and says:

“The regeneration potential of the former Castings site has long been identified due to its superb location and capabilities following the securing of outline consents. To have completed two separate, significant deals on the whole site is extremely positive for the Lincolnshire area as this signals huge inward investment and potential job creation further along the line.” 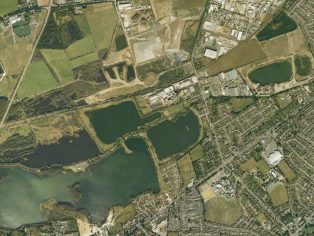