Almost 1,200 new Redrow homes are planned across four North West sites as the award-winning homebuilder looks to expand its business.

The developments will have a combined finished worth of almost £360 million and, along with new homes and jobs, will provide a wealth of community benefits.

Perhaps the most significant of the new schemes is the one closest to home for Redrow – the company has plans for 850 new homes on a 77 acre site adjacent to its divisional headquarters in Daresbury, near Warrington.

As part of its Daresbury plans, Redrow will be investing £8.5million in the community; including the creation of a new local centre, highway and public transport improvements, open space provision and affordable homes.

The award-winning homebuilder also has plans for a new phase of 107 homes at the flagship Woodford Garden Village project, plus an additional 77 homes in Sandbach, where properties at Abbeyfields are already proving popular.

Over at Allerton Priory, in Liverpool, Redrow plans to build 160 new homes across 16.3 acres.

With the HBF estimating an average of 4.3 jobs supported for every new home built, the developments could amount to more than 5,100 jobs being sustained, either through direct employment on site, indirect employment within the supply chain or induced employment through the spending of construction workers and residents in local shops and businesses.

“Between them these four schemes will provide almost 1,200 new homes and what’s particularly exciting is that the vast majority of them will be built close to our divisional offices, giving the entire team the opportunity to watch the development progress.  The project here in Daresbury will also include expansion to the science park providing 15,000 sqm of high tech office and innovative space plus a 3,000sqm new local centre. Creating new communities is a key element of what we do and we will be investing around £8.5 million in the Daresbury area. This includes a £4.3 million contribution to the Daresbury Expressway infrastructure and almost £2 million towards pubic open space.”

More than £1.1million will be invested in public transport, with additional funding allocated for greenways walking and cycling routes. A payment of more than £500,000 will be made for off-site affordable housing.

As part of the wider Woodford Garden Village scheme, on the site of the former aerodrome, Redrow has committed funds for the local community worth a total of £9.6 million, including a £3.5 million primary school, improvements to local transport provision, roads and footpaths, plus a contribution towards affordable homes.

This latest phase of 107 homes at Woodford will be built across 8.9 acres of the 500 acre site and will include 13% affordable housing provision.

Over in Sandbach, 30% of the 77 homes in the new phase will be affordable housing, with £70,000 due to be invested in the local community. The first properties on the 4.2 acre site are due to be released for sale this spring/summer.

Linked to the Allerton Priory scheme, Redrow will fund £40,000 worth of ecological off-site mitigation and replant trees on Woolton Road.

Redrow NW operates throughout Cheshire, across North Wales to Bangor and in parts of Merseyside and Greater Manchester and achieved 30% growth in the last financial year. 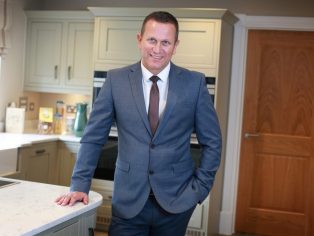