The shortlist for the prestigious 2016 RIBA Stirling Prize for the UK’s best new building has been announced today (Thursday 14 July).

Six buildings will compete for architecture’s highest accolade which will be awarded in October.

Half the shortlist are education buildings, with one client, the University of Oxford, responsible for an unprecedented two of the six projects.

“The shortlisted projects are each fantastic new additions to their individual locations – on an urban street, a city riverside, an estate regeneration, an historic city centre and a hidden part of the countryside – but their stand-out common quality is the inspiration they will bring to those who study, live, visit and pass by them, for generations to come.

“To me, this shortlist reflects everything that is great about UK architecture – a blend of experimental, artistic vision and a commitment to changing people’s lives for the better.”

WilkinsonEyre have opened up the Bodleian’s Weston Library to the world. The restoration of one of the world’s greatest research libraries featured the transformation of Giles Gilbert Scott Grade II listed building by the addition of a bold new glazed mezzanine.

The Blavatnik School of Government designed by Herzog & de Meuron was described as ‘a radical new landmark’ by RIBA. The university building is located in a conservation area and features a succession of wide twisting staircases, offset balconies and communal spaces.

Architects Michael Laird Architects & Reiach and Hall Architects have created a new icon on the Glasgow skyline with City of Glasgow College’s Riverside Campus. The campus is anchored by two generous civic spaces, a cloistered garden and grand hall.

Trafalgar Place, the first results of the wholescale redevelopment of Elephant and Castle’s 1970s Heygate Estate, are on the shortlist. dRMM Architects have designed a flagship development of 235 high density, high-quality homes set amongst retained mature trees and extensive landscaping; bringing a sense of tranquillity to a very urban location. Clever use of brickwork gives the new buildings an identity of their own; eight types of brick have been used, each one chosen to reference neighbouring buildings.

Outhouse by Loyn & Co is the first private house to feature on the RIBA Stirling Prize shortlist in 15 years – the previous contender was The Lawns by Smerin Architects in 2001. An exemplary concrete house on the Welsh borders, designed for a couple of retired artists, it delights with unexpected spaces, some underground, with a field as the roof. The architect’s use of light, air and vistas make the absolute most of its sloping site and wide views.

Reiach and Hall, Caruso St John and dRMM have all been nominated once before. Michael Laird Architects and Loyn & Co Architects are shortlisted for the first time.

The Stirling Prize winner will be announced on Thursday, 6 October 2016. 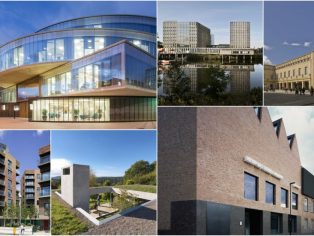 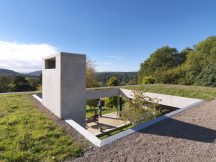