Residents have already started to move in to new homes in Runcorn after a three year regeneration project is completed.

Woodland Walk, Runcorn has been transformed from a 1960’s eyesore thanks to a £10million investment from Liverpool Housing Trust (LHT) part of Symphony Housing Group and £4.5million of funding from the Homes and Communities Agency (HCA).

In total, 98 homes have been built, including 58 two bedroom flats, 19 two and three bedroom houses for rent – as well as 21 Shared Ownership homes.

Since work began in 2010, over 240 deck access flats were demolished as they were not fit for purpose.

In October 2011, residents from the remaining old blocks were given priority to move into the 18 new flats that were constructed on empty land near to Woodland Walk.

Once the demolition of the grey, concrete blocks of flats had been completed, work began in Spring 2012 on building 21 new homes for shared ownership and reservations had been placed on many properties by the new year.

The following six months saw the completion of the remaining 59 homes for rent.

The transformation of Woodland Walk is captured in two pictures taken in March 2011, shortly before demolition began, and subsequently in July 2013 following completion of the new homes.

The redevelopment of Woodland Walk and its two spine blocks have not only removed an imposing blight on the local landscape; it has improved Castlefields neighbourhood for new and existing residents.

Lynsey Jones, 35, moved into her new home in Merlin Close, part of Woodland Walk back in May with her husband and two children;

“I am delighted with our new home, we have our family close by and it is convenient to get to the schools.

“I can allow my children to play out for the first time as there is lots of open space and it feels really safe.”

“I know how important the replacement of these deck access flats is locally.

“I am really pleased that the HCA has helped to support this transformation by investing £4.5million to provide 98 new, modern affordable homes on Woodland Walk.”

“The improvements at Woodland Walk have been fantastic; the new homes complement the neighbourhood and we have had a great reaction to the project.

“The modern, energy efficient homes let in a lot of natural light and residents benefit from cheaper fuel bills.

“Access for vehicles and pedestrians has been improved and the landscaping in the surrounding areas has given it a new lease of life.”

The Woodland Walk project is part of a wider regeneration project in Runcorn, led by Castlefields Regeneration Partnership. The partnership ismade up of Liverpool Housing Trust (LHT), Halton Borough Council, Plus Dane Group and the Homes and Communities Agency (HCA).

LHT is continuing to invest in Castlefields with work starting on the next phase of construction to build 38 new homes in the area. 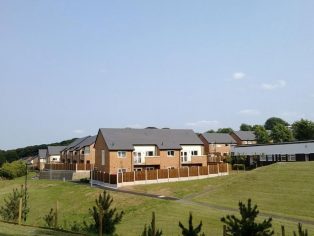