As the driving force of creativity and commerce during London Design Festival, 100% Design will return this September (17-20), celebrating its 20th anniversary

International creator Philippe Starck will open the show on 17 September, to coincide with the unveiling of Flexible Architecture, his new ceramic tile collection for Ceramica Sant’Agostino on Capitol Designer Studio’s stand. This special edition, staged over 22,000 sq m within Earls Court London, will mark the show’s last appearance at this iconic venue before moving to Olympia London in 2015.

As the biggest design event in the UK, 100% Design is always known for its leading position in commissioning thought-provoking editorial content to question, inform and invigorate the design community. Since the show was first staged in a tent off King’s Road (London) in 1995, it has gone on to become the benchmark event for promoting design excellence and creativity, both within and outside the UK.

Promising innovative content to reflect the key influences which have made London a global design capital, the 20th edition of 100% Design is set to celebrate the show’s overall contribution to the rise of British design in the last two decades, while reinforcing the importance, longevity and future of the show.

Interiors
Showing for the first time in the Interiors section, Heal’s will launch the 2014 edition of its Heal’s Discovers collection at 100% Design, while Swiss design maverick Vitra will present a variety of new products from its Home Collection 2014, which includes fresh, contemporary designs by Edward Barber, Jay Osgerby and Jasper Morrison.

Kitchen & Bathroom
In the Kitchen & Bathroom section, kitchen specialist Piqu will launch a new furniture collection, Vinculum, and Poggenpohl will bring its P’7350 kitchen to the UK for the first time. LG Hausys’ HI-MACS® will return to the show, presenting its futuristic kitchen island, The Sky is the Limit, designed by Xavier Bonte.

German bathroom manufacturer Keramag Design will also return with its new range of super slim shower trays and a slim-line cistern unit, and Italian bathroom specialist Zucchetti.Kos will exhibit at the show with its Agorà collection designed by architects Ludovica and Roberto Palomba.

Workplace
100% Design is the only event during London Design Festival that will have a section dedicated to design innovation within the working environment. Specialising in ergonomically designed office chairs, Bestuhl UK will launch its new J2 and Jcon range of seating exclusively in the Workplace section at 100% Design. Dutch contract furniture specialist Casala will showcase Monolink, the company’s first chair that allows for both linking and stacking.

Eco, Design & Build
At 100% Design 2014, a range of eco specialist brands will make their first appearance in the Eco, Design & Build section. Holland-based Mobilane will unveil its new electricity-free living wall, LivePanel 2.0 at the show, while Mykon – specialising in architectural panels and surface solutions in the UK – will exhibit its new Blade table by Alexander Purcell Rodrigues, which has been created utilising aluminium honeycomb and newly developed fabrication techniques.

Emerging Brands
100% Design continues to offer a global platform for young designers from around the world to showcase their talent, and this year’s show is no exception with a carefully curated selection of new design companies exhibiting in the Emerging Brands section.

A newly-launched Paris-based company MASAM will present a new collection that uses folding and unfolding techniques to experiment with new materials; these range from combining translucent alabaster with Japanese paper, to mixing fine leathers with wood and brass. Meanwhile, Denmark-based Korridor Design will showcase a series of candleholders that are cast using pigmented cement, meaning that each one of them will have its own unique surface.

Curated by Claire Barrett, previously editor of Grand Designs magazine and launch programme director for Inside Festival, the talks programme will cover a wide range of on-trend subject areas and issues, including headline talks from some of the world’s best designers and architects – from Jaime Hayon and Nina Tolstrup, to Ross Lovegrove, Maxim Velcovsky and Eric Klarenbeek.

The show auditorium, home to Talks with 100% Design, will be designed by long-time exhibitors and London-based design duo El Ultimo Grito.

Get your ticket now by registering at www.100percentdesign.co.uk 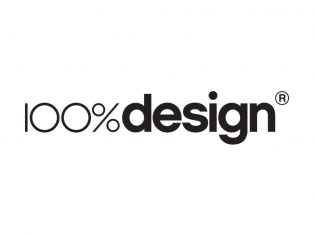 A table and chair designed by Jakob Gomez Studio, to be found in the Emerging Brands section